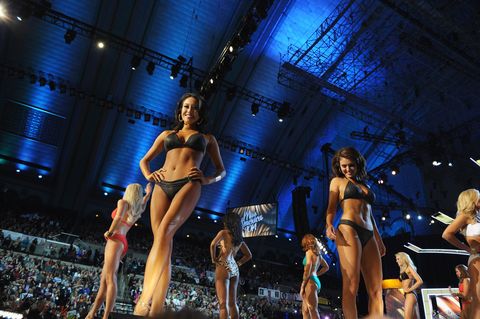 When I was a tween, I occasionally watched the Miss America pageant. I didn’t love it or anything, but pageants were big TV events that people in my suburban hometown talked about, so I tuned in. And every year, I recall it giving me a sort of existential panic, less acute than the feeling I got when I first saw, say, Christina Aguilera’s “Dirrty” video for the first time, but still very real—like I was far away from ever being desirable or accepted by any mainstream beauty standards.

Which might be why I never considered pageants a feminist outing, even if Miss Congeniality made a convincing argument otherwise. But when the Miss America Organization announced Tuesday it would be doing away with the swimsuit and evening wear portions, citing the #MeToo movement and a desire to focus on “[putting] the ownership of a woman’s presence and beauty in her hands,” I had a surprising amount of feelings.

Was this decision telling contestants that their involvement in the swimsuit competition was actually misguided the whole time?

Among them: Does getting rid of these events really change the fact that pageants ultimately pit women against each other? What about people for whom pageants were important—competitors who actively chose to be part of the pageant world? Was this decision telling them that their involvement, potentially for years, in two elemental parts of pageant competition was actually misguided and anti-feminist the whole time? And if so, isn’t telling a woman that the thing she wants is actually not-OK the same kind of dictate we’re trying to avoid?

Feminism is hard! But to see if I could answer any of these questions, I contacted Samantha Russo, a former Miss America contestant who represented the great state of New Hampshire in 2014, after she posted some insight into the decision on her Instagram. Russo explained to me that she was drawn to pageants because of the scholarship money, and that her participation in them helped her knock out half of her student debt in less than two years. She also told me she’d been expecting the swimsuit competition to be scrapped for some time, ever since former Fox News correspondent and current Miss America Organization chairwoman Gretchen Carlson warned in a January interview that "potentially big changes" were coming to the pageant.

“The part I don’t think anyone else saw coming was the evening wear competition being eliminated as well,” says Russo. “My initial reaction was: How is this organization now going to be able to differentiate itself from the hundreds of other organizations that also focus on scholarships, community service, and talent, without swimsuits? Because a lot of people haven’t heard of those other competitions.”

For Russo, the swimsuit competition (what Miss America formally calls the "Lifestyle & Fitness" phase) is one of the most life-affirming aspects of pageants. She even credits it as the reason she later pursued her personal training certification. “I got really lucky and aligned myself with a lot of the Miss New Hampshire sponsors that were incredibly knowledgeable on health and fitness, so I really did learn the proper ways to fuel my body and not do any crazy workouts,” she says. “To see my body so strong, that was really, really empowering.”

Still, Russo admits that some of the stereotypes of pageants are definitely true. “I don't want to discredit people who did not have the experience that I had, because I know that the stereotype of these competitions is that girls don't eat and they work out for hours on end and they're taking diet pills—and I think there's a lot of that within the organization,” she says. “I wish that instead of completely eliminating the swimsuit competition, we could kind of look at our sponsors and look at the way that we're teaching young women about health and fitness.”

"Miss America showed me when you get together with women with similar goals, you can meet your best friends."

I asked her if the competition had instead made room for more inclusive ideas about bodies. “I wish it was made more [transparent] what the judges are asked to judge on, because it seems like they hype up the bikini competition of the broadcast,” she says. “If that was a smaller portion of the live broadcast, where we could maybe see more of the interview" — which is actually much longer than what’s shown on TV — "we could see more people's talents, as opposed to making those other things the highlight.”

Ultimately, though, Russo thinks that pageants were actually crucial to her growth as a feminist. “Growing up, I was always taught that other women are your competition. Like, watch your back because women are catty and mean,” she told me. “But Miss America showed me that when you get together with a ton of other women that have similar goals to yours and who want to do good in the world, you can meet some of your best friends.”

This is just one person’s experience, and Russo acknowledges that. Yet her solutions are worth keeping in mind. A transparent course-correction of the metrics used to judge the bikini competition could make it a healthier enterprise without potentially underscoring all the ways pageants are outdated. Same with minimizing the hullabaloo around those parts of the competition during the live broadcast. One thing is clear from what Russo told me: Completely ditching pageants altogether would have potentially harmful repercussions for a lot of women who find value in them.

Because, in the end, most of us really do want world peace.