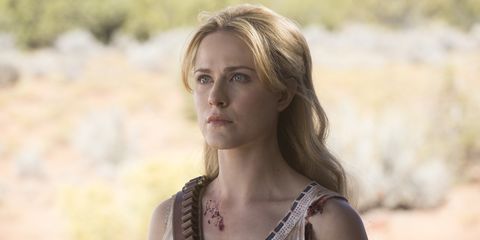 All season, Westworld has been weaving together overlapping timelines and plot points in an epic, if sometimes confusing, tapestry of storytelling. This week's episode dove into William's (aka The Man in Black) backstory, answering a few big questions that have been looming for him. Let's address those now, before we move on to the rest of the episode, in particular, the shocking final moments.

The Man in Black's story:

Why did William's wife, Juliet, kill herself?

The short version: Because she learned the truth about who he ~really~ was.

The longer, slightly more nuanced version: Juliet is an addict. Her drug of choice is alcohol, which she had been using increasingly to numb the pain she felt in her marriage and her day-to-day life in the years leading up to her suicide. The night she died, she drank too much and her daughter, Emily, threatened to put her back in rehab, forcibly this time along with a psychiatric hold.

For a long time, Emily would blame herself for her mother's death, believing this threat to be the instigator.

In fact, shortly before she died, Juliet asked William to tell her something true and, more specifically, to tell her if he ever really loved her. Thinking she's asleep, he basically admits that he's not the man he pretends to be and hints at the monstrous side of him brought out in Westworld. When he leaves, she gets up and locates his personality profile (courtesy of Ford, earlier that evening—it's a chip containing a complete profile of William based on his experiences in the park). She reads it, is understandably horrified, and decides to take her own life after hiding the chip in a music box where she knows Emily will eventually find it.

What does Emily plan to do to torture William?

Last week, Emily "rescued" her father from Ghost Nation, promising to do worse to him than they ever could. This week, we learn that Emily's plan was essentially to get her dad to a hospital, nurse him back to health, and then expose him and Delos' whole immortality scheme.

Why did you just write about Emily in past tense?

Because William, aka The Man in Black, aka her father kills Emily this week. When the help she called for arrives, he steals a gun from one of the Delos security guards and proceeds to kill all of the Delos employees and then, finally, Emily. In his defense (by reason of insanity), he sincerely believes that she and the guards are hosts sent by Ford to mess with him and distract him from finding The Door.

Realizing what he's done and appropriately devastated, William nearly dies by suicide, but changes his mind at the last second and decides to continue the game—although, perhaps, now with a new sense of purpose (hopefully?).

Is Ford still controlling him?

Let's face it, there's only one question that really matters with Bernard right now and it's about Ford's status as puppet master of his thoughts. As of the end of the episode, Bernard seems to have deleted the Ford code from himself. But honestly, who knows? It is Ford, after all.

So, did Ford do anything noteworthy before Bernard deleted him?

Why yes, he did! He had Bernard take him to see Maeve, for whom he had a message. Ford owned up to being the person who changed Maeve's narrative and tried to send her out of the park last season. He also revealed his motive for this: Of all the hosts in the park, Maeve is his favorite and he's always thought of her like a daughter.

This is very interesting because it means Ford feels about Maeve the way Arnold seemed to feel about Dolores. It also means he knew things were going to get dark in Westworld and he wanted to protect Maeve from the fallout. He understands Maeve's decision to stay to save her child though, and implies that she's the reason he stayed as well. Finally, he encourages her not to let her story end here, after which we see her take control of her programming iPad.

Okay, so what was that shocking final moment?

Dolores and Teddy are preparing for the final leg of their journey, having lost all their henchman/companions in a battle with Ghost Nation. As they stare out at the great, wonderful beauty of Westworld, Teddy reveals that he's not Dolores' well-trained pet after all. He remembers everything and has finally, truly, become self-aware. He recounts the first moment he saw Dolores, in the Delos labs, and falling in love with her.

She asks if he still loves her and he says yes, of course. She asks if she would ever hurt her and he says no, never. In fact, he promises to protect her until the day he dies—just before apologizing for not being able to protect her any longer and shoots himself. The moment is devastating for Dolores and might just change the course of what she plans to do with the data she got from Peter Abernathy (since, as of right now, all the host's backups have been destroyed, which means Teddy is Deddy for real this time).

This content is created and maintained by a third party, and imported onto this page to help users provide their email addresses. You may be able to find more information about this and similar content at piano.io
Advertisement - Continue Reading Below
More From Culture
Tati Gabrielle Is Incredible in 'You'
HBO Dropped More Glimpses of 'Euphoria' Season 2
Advertisement - Continue Reading Below
'Ginny & Georgia' Season 2: Everything We Know
All the Deets on Michelle's 'Bachelorette' Season
Thrilling New True Crime Documentaries
What Is Stephanie Land Doing Now?
'Succession' Is Ready to Go 'Full F*cking Beast'
The 2021 Book Releases You Don't Want to Miss
'Squid Game' Season 2: Everything We Know
Breaking Down the Ending of 'Maid'