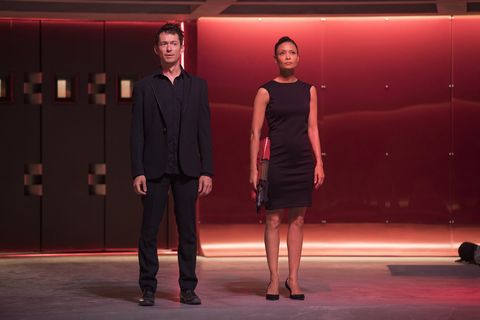 This post contains spoilers for Westworld season two, episode one, "Journey into Night."

After an excruciatingly-long, 16-month hiatus, Westworld returned tonight with its season two premiere. The episode, "Journey into Night," picks up after the shocking events of the season one finale. No, it was not a dream. Yes, the hosts did slaughter dozens of humans—and yes, Ford does appear to be really, most sincerely dead.

In true Westworld fashion, however, the episode doesn't pick up right after the robot uprising—or, at least, parts of it don't. The premiere is already playing with the timeline (even in ways viewers will all catch right away this time). And, because it's Westworld, the episode left us with more questions than it answered (is anyone surprised by that?). Here are the eight biggest lingering questions after the season two premiere.

1. How did Bernard end up unconscious on the shore?

The episode begins with Bernard coming to on a shore, being swarmed by Delos security about a week and a half after the bloodbath party kicked off by Dolores murdering Ford. Even though we jump back in time enough to know that a lot has happened to Bernard between the party and the shore, it's still not clear how he ended up there—and probably won't be for a while, given Westworld's love of timeline jumping.

During a very brief exchange, we hear someone from Delos refer to Westworld as an "island." BUT WHERE IS THAT ISLAND?

3. WTF are the drone hosts and what role will they play later?

When the timeline jumps back to the night of the massacre, we learn that Bernard escaped the party along with a group of humans that included Delos exec Charlotte Hale. While the rest of their party falls for a trap set by the hosts and most are murdered, Charlotte and Bernard make their way to an outpost so secret that even Bernard didn't know it existed.

Inside, they encounter these creepy AF guys:

The all-white drone hosts are worker bees and Charlotte is already very much aware of their existence. Since Bernard, the head of Westworld's programming division (aka, the guy who controls the behavior of the hosts), isn't aware these things existed, it will completely impossible to predict how they'll act. Will they stay loyal to the humans? Will they join the robot uprising? Will they start their own, creepy and silent revolution? There's honestly no telling.

4. What is Delos doing with the data it's collecting from guests?

While in the very-secret outpost, Bernard stumbles across evidence that Delos is collecting information about the park's guests—including their DNA. When Bernard confronts Charlotte about this, she doesn't deny it, but also refuses to tell him why Delos is collecting this info. It can't be good, that's for sure.

5. What is Bernard leaking?

Early in the episode (during the immediately-following-the-massacre timeline), we see a clear substance leaking out of Bernard's ear. As the episode progresses (in that timeline, at least), he starts to malfunction. His hand shakes uncontrollably, his vision goes blurry, he starts to pass out.

He's able to buy himself some time by extracting the same clear liquid from a decommissioned host and secretly injecting it into himself. It definitely seems like more of a bandaid than a solution. So that begs the question: What is Bernard leaking and how will he actually fix it without giving himself away as a host (since, you know, the humans are murdering and lobotomizing every host they find)?

Dolores is very clearly taking charge of things in Westworld. She makes it clear that she wants to conquer not just Westworld but the bigger world outside, as well.

7. What is The Door and will William/The Man in Black find it?

During one very interesting scene, The Man in Black (who we now know is William—can we just call him William?), meets the Young Ford robot, who tells him that even though The Maze was not for him, the next stage of the game—The Door—is expressly for him. Hopefully this one doesn't take him another 35 years to solve.

8. How did Bernard kill the other hosts? Are they really dead?

The episode ends back where it began, with Bernard in the 11-days-later timeline. The Delos security team looking for the hosts and finds them on the park's GPS, clustered together. When Team Delos goes to the site where all the hosts are, they find them dead, floating in a giant body of water that no one seemed to know existed.

Bernard looks on in horror and says that he killed them all. We learned earlier in the episode that the hosts have a hive-mind feature that Bernard tapped into to help Charlotte find the host she wants to smuggle out of the park (Dolores' dad, FWIW). Did he tell them to all go jump in the lake? Did he accidentally cause a glitch? Did he send them there, not realizing they would drown?

It's Westworld, so at least we know the hosts' (including Teddy, poor guys) deaths aren't permanent, but still—QUESTIONS.