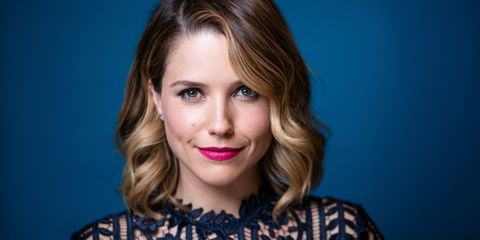 Sophia Bush has been super endearing ever since she came on the scene as Brooke in One Tree Hill, and she’s stayed that way for 15 years (!), thanks to her role in the iconic teen flick John Tucker Must Die, her dramatic turn on Chicago P.D., and her brave and outspoken activism about things like the #MeToo movement and women’s education.

But did you ever stop and think that she’s never really had a major starring role? That’s crazy! The woman has 1.3 million Twitter followers—the people demand more Sophia Bush!

Fortunately, she announced that a new show is about to remedy this oversight:

This what I’ve been up to this year, fam. Developing this project. Getting this character that feels like she already lives in my bones ready for you. I am so excited to finally be able to share this “blockbuster commitment” with all of you!! #HereWeGo #Surveillance https://t.co/32lijj4hRe

Her post reads: “This is what I’ve been up to this year, fam. Developing this project. Getting this character that feels like she already lives in my bones ready for you. I am so excited to finally be able to share this ‘blockbuster commitment’ with all of you!!”

According to Deadline, Surveillance “is described as a complex and timely spy thriller centered around the head of communications for the NSA (Bush), a charming operative who finds her loyalties torn between protecting the government’s secrets and her own.”

Is Bush going to be like a kickass, brunette Edward Snowden?! TBD. But the pilot is set to start filming this fall, so it won’t be long until we find out.

Related Story
15 New Shows With Strong Women Leads
This content is created and maintained by a third party, and imported onto this page to help users provide their email addresses. You may be able to find more information about this and similar content at piano.io
Advertisement - Continue Reading Below
More From Culture
What Makes an Olympic Moment?
Team USA Fencers Protested Their Teammate
Advertisement - Continue Reading Below
Hang On, What's "ROC" at the Olympics?
Suni Lee Just Scooped Up Gold in Tokyo
Movies Everybody Should Watch At Least Once
'Virgin River' Season 4: Everything We Know
'Love Is Blind' Season 2 Is Coming!
Simone Biles' Sister Is Her Fiercest Champion
Simone Biles Quotes to Live By
Could 'Manifest' Come Back for a Fourth Season?