On Wednesday morning, ride-sharing app Uber unveiled its new logo, courtesy of Adweek. The pared-down logo, which gets rid of the all-caps look in favor of a rounded, more approachable format, is just one part of what Adweek's Diana Pearl calls a "brand revamp." The company, according to the report, is aiming to put its troubled reputation—which has been marred by multiple controversies—behind it with the revamp.

Let's start with the logo. The first Uber logo was unapologetically brash, the word "UBER" written in square white capitals on a black background. It looked more like a road sign than an approachable brand. Later, the writing became black on white, but with the same format. With the new logo, Uber is seemingly trying to reframe itself as a more friendly brand—the "Uber" keeps only the capital "U", and is otherwise written in a curved, lowercase format. The typeface, according to Adweek, was custom-made for Uber, and has been named Uber Move.

The new "Uber" logo will also replace the old symbol that used to show up on the first page of your iPhone. It'll read simply "Uber," rather than showcasing the formerly harsh white circle against a dark background. (Formerly black, the background later became shades of green and black.)

There's more. Inside the app itself, you'll find new animations and coloring, like a blue "safety" symbol that will represent "safe" spaces, like college lighting, according to Adweek's Pearl.

The primary colors will remain black and white, but "secondary" colors will also play a role—they'll "take inspiration from transportation," Adweek reports, e.g. shades of orange and brown.

Here's what it was tweaked to, later:

And here's the new one.

Twitter's response? Yeah, the old one was kind of weird, anyway. 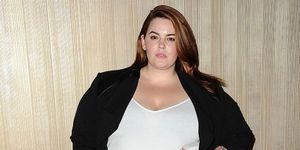 Tess Holliday Calls Out Fat-Shaming Uber Driver
This content is created and maintained by a third party, and imported onto this page to help users provide their email addresses. You may be able to find more information about this and similar content at piano.io
Advertisement - Continue Reading Below
More From Culture
The Best Feel-Good Movies to Curl Up With
'Shadow and Bone' Season 2: Everything We Know
Advertisement - Continue Reading Below
Will There Be a Season 3 of 'Virgin River'?
The 'Younger' Cast Plays Trivia About Each Other
The K-Movies on Netflix You'll Be Hooked On
The 12 Best Action Movies of 2021 (So Far)
Ready for a Good Cry? Try a Korean Romance Movie
The Most Eagerly Anticipated Horror Movies of 2021
Jessie Ennis & Charlotte Nicdao on 'Mythic Quest'
The True Crime Podcasts We've Been Hooked On