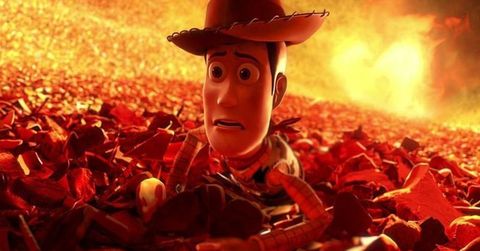 To recap (and, I mean, spoiler warning I guess, but Toy Story 3 came out in 2010 and if you haven't gotten around to seeing it in the last eight years, do you really care that much about spoilers?), near the end of the third movie, Woody, Buzz, and the rest of the toys are very nearly burnt to death in an incinerator—you know, because Pixar.

Thankfully, the toys pull off a last-minute escape and end up being donated to a wonderful little girl named Bonnie. When we last see Andy's toys, they're starting their new lives as Bonnie's toys and everything seems like it's going to be great.

But, like, maybe not, apparently. In a new interview on The Chris Evans Breakfast Show on the BBC, Tom Hanks, who voices Woody, talked about the upcoming Toy Story 4, and it sounds like Pixar isn't done making adults sob openly in movie theaters.

"When I realized what they were going for, I realized, 'Oh, this is a moment in history,'" Hanks said. "The emotional range of the movies has become more and more deep and profound and affecting."

"Here's the thing about those geniuses that are there at Pixar and everybody who has ever been involved in any of the 'Toy Story' things: they invented something there," Hanks added. "It is a very, very, very special collection of movies that have been put together that, I think, hits each one of us in a completely individual way."

Hanks isn't the only Toy Story actor spilling tea about the fourth installment. In September, Tim Allen, who voices Buzz Lightyear, told ET Canada that he literally couldn't get through the new movie's final scene.

"It is so emotional; it's so funny; it's so big. The idea they've come up with, I'm startled," Allen said. "[Toy Story 3] was, I thought, amazing. This, I couldn't even get through the last scene. They've got great characters but a couple of scenes toward the end were really hard to get through."

So, you know, start stocking up on tissues now.