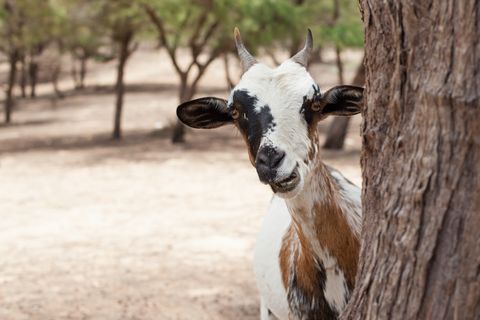 It’s Friday which means that you survived another week in these strange, strange times and you deserve a treat! How about the information provided in this study about goats, which suggests that if you smile at them they’ll like you more? Yes, that will do very nicely I think.

In a study published in Royal Society Open Science (hat tip Mental Floss), a group of researchers at Queen Mary University in London found that goats aren’t just being misogynistic when they say you’d look better if you smiled more: They’d actually prefer your presence if you did.

The study involved 20 goats recruited from Buttercups Sanctuary for Goats in the United Kingdom, which takes in goats that were neglected or abused and is also probably my future employer (sorry, Marie Claire). The animals were put into a pen lined with photos of people making either happy or angry faces.

“Overall, we found that goats preferred to interact first with happy faces, meaning that they are sensitive to human facial emotional cues,” the study reads. It also defines interaction as, “gazing towards or physically interacting with the images. Gazing was defined as being positioned in the target area and having their head oriented towards one of the images. Physical interaction was defined as touching the image with their snout.” Awww! I could use a loving gaze from a goat right about now.

The study determined that the lasting effects of domestication on these animals may have given them the ability to not only discriminate between emotions on non-goat faces, but also to prefer happy faces. It makes sense, from an evolutionary standpoint: If you relied on people for your care, you’d be much more relieved to see that your person is happy to see you.

So the next time you’re around a goat at a petting zoo or a farm or, I don’t know, goat yoga, give those little buddies a smile. You’ll be a regular Dr. Doolittle.

Related Story
This Story About 100 Loose Goats is the G.O.A.T.
This content is created and maintained by a third party, and imported onto this page to help users provide their email addresses. You may be able to find more information about this and similar content at piano.io
Advertisement - Continue Reading Below
More From Culture
Suni Lee Just Scooped Up Gold in Tokyo
Movies Everybody Should Watch At Least Once
Advertisement - Continue Reading Below
'Virgin River' Season 4: Everything We Know
'Love Is Blind' Season 2: Everything We Know
Simone Biles' Sister Is Her Fiercest Champion
Simone Biles Quotes to Live By
Could 'Manifest' Come Back for a Fourth Season?
'Bachelor In Paradise' 2021: Everything We Know
Read an Excerpt From 'We Were Never Here'
How to Join Marie Claire's Virtual Book Club