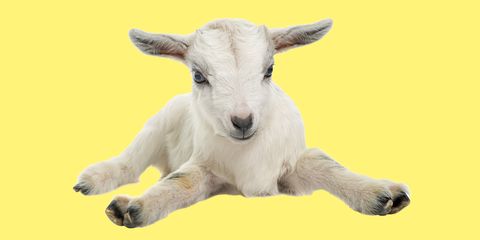 The news is often bad these days, so it’s a relief when I'm able to report that the day's trending story is both adorable and ecologically responsible. Well, we got a live one, and this time it's about goats on the loose! And before we even get into the story of how over 100 goats roamed the streets of a suburban neighborhood outside of Boise, Idaho, I’m delighted to announce that no goats or people were harmed in the making of this story and that residents were actually pretty cool with everything! Let's proceed.

It began with a local reporter’s tweet that went super-viral Friday am, when the origin of the goats and their endless appetites was still a mystery to residents.

#Breaking - About 100 goats are on the loose right now in a #Boise neighborhood. They are going house to house eating everything in sight. Nobody has a clue where they came from...updates to follow pic.twitter.com/K0ghUwQEfk

It didn't take long to get to the bottom of it: The goats belonged to We Rent Goats, a local company that, uh, rents goats, and also has the enviable URL WeRentGoats.com. Did you know you can rent goats for your yard? Typical reasons to do so include clearing brush from a steep or rocky area that a tractor might not be able to get through, finding an environmentally-friendly alternative to spraying chemicals, and wanting to hire nature’s most adorable weed-whacker to do your landscaping.

According to Matt Gabica, 33, who co-owns the company with his wife, Kim, We Rent Goats was hired to clear out a pond in the Boise neighborhood, and they fenced in 118 goats to get the job done. The animals did their job diligently for about a day, but then were over it and decided to escape (so Sagittarius of them).

“The goats were leaning against a wood fence and some of the boards broke,” Gabica tells MarieClaire.com. “It was only a 9-inch hole, but all 118 goats figured out how to get through it.” Because goats are herd animals, says Gabica, when one goat gets separated from the group, it either panics and tries to get back in or the other goats panic and try to stay with it. Guess which thing happened in Boise?

Gabica says the company actually found out about the loose goats from the news, and drove over immediately to retrieve them. Thanks to the neighborhood getting together to help round them up, all the animals were loaded onto a trailer with minimal hassle. “Goats ate a few of the local trees and shrubs, but we talked to the neighbors and we’re going to get those replanted,” he says.

Overall, everyone had a pretty good sense of humor about the whole thing.

Party is over “kids”! Loose goats have been cornered and loaded back onto a truck owned by “We Rent Goats” pic.twitter.com/qWHrb7X7n6

Though he can't say whether the story will be good for his company, which is already booked out for months in advance—his business is renting goats, and business is good—Gabica hopes that today's viral news ends up spreading awareness about using goats as an alternative to noisy machines or unsafe chemicals. And though you'd think he'd be sick of them by now, Gabica says he still thinks goats are pretty freakin’ adorable. “I’m a 33-year-old man and I will openly admit that they are very, very cute animals,” he says.

The moral of the story is that it would be good for America’s morale if we had one heartwarming, goat-related story mandated per week. I think we can make this happen. U.S.A.! U.S.A.!

Related Story
'You've Got Mail' Is 20 Today. Does It Hold Up?
This content is created and maintained by a third party, and imported onto this page to help users provide their email addresses. You may be able to find more information about this and similar content at piano.io
Advertisement - Continue Reading Below
More From Culture
The Cast of Grand Army Are BFFs IRL
A Look Back at Princess Anne's Life in Photos
Advertisement - Continue Reading Below
Who's in 'The Queen's Gambit'?
'After We Collided' Stars Play Trivia With Us
'The Crown' Season 4 Is Coming So Soon
It's Been a Weird Year for 'The Bachelorette'
Who Plays Townes in 'The Queen's Gambit'?
The Best Korean Dramas to Get You Hooked
To Save Victims, We Must Dismantle Purity Culture
Will There Be a Season 2 of 'The Queen's Gambit'?