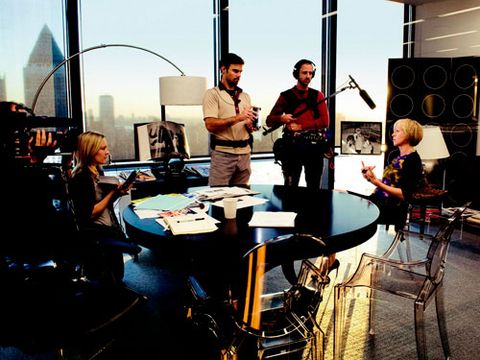 I CONFESS: Not long ago, I caught myself wondering what it would be like to be a cast member on The Hills, stalked by cameras and pouting my way through everything from style issues to traffic jams. Real or not, I rather envied those girls. Nobody looks that good scarfing down a spicy tuna roll. Then I got the chance to see for myself what goes into the making of a reality show.

Marie Claire's offices were recently invaded by cameras filming our upcoming docu-series, Running in Heels, which premieres March 1 on the Style Network. The show tracks the lives of three Marie Claire interns hoping to make it at a women's magazine. Along with various colleagues, I was miked virtually around the clock, which meant that all my indiscreet potshots — about crazy celebs and rival magazines — became juicy fodder for the show's producers. (Forget the dollar jar, ladies. The easiest way to curb your cursing is to walk around with a microphone fastened to your bra.) Thank goodness for Renée Zellweger, featured on last month's cover, who shared this lifesaver with me during her cover shoot: If someone starts a private conversation with you while you're wearing a mike, just tap it repeatedly. It warns the other person that you're not quite alone, while also obscuring the sound. Renée, I owe you one.

For four months now, I've endured cameras catching me racing to meetings, scolding interns who failed to spell-check, and, yes, scarfing down the occasional sushi roll. While some of it won't make the final cut, there'll be no shortage of edge-of-your-sofa drama. So grab your girlfriends, order takeout, and be sure to watch us run!