Alert: While you were sleeping, Lin-Manuel Miranda quietly dropped the final "Hamildrop" track—and this one, fittingly a cover of Christopher Jackson's "One Last Time," features Barack Obama himself. The track, originally written by Miranda as a loving goodbye from George Washington to the country he served upon his resignation in 1783, is labeled "One Last Time (44 Remix)," and features Obama re-reading extracts of George Washington's famous resignation speech, which Christopher Jackson reads in the original song. (Christopher Jackson also sings in the Obama version.)

Here's the Washington extract that Obama reads in the track:

Though, in reviewing the incidents of my administration, I am unconscious of intentional error, I am nevertheless too sensible of my defects not to think it probable that I may have committed many errors. I shall also carry with me the hope that my country will view them with indulgence. And after 45 years of my life dedicated to its service with an upright zeal, the faults of incompetent abilities will be consigned to oblivion, as I myself must soon be to the mansions of rest. I anticipate with pleasing expectation that retreat in which I promise myself to realize the sweet enjoyment of partaking. In the midst of my fellow-citizens, the benign influence of good laws. Under a free government, the ever-favorite object of my heart, and the happy reward, as I trust, of our mutual cares, labors, and dangers.

Here's what Miranda shared Thursday night, and how you can listen to it:

The only thing that could possibly make this any better is if Obama had sung Christopher Jackson's part of the song instead of Jackson, but I get it, not super presidential. (More presidential than trying to shut down the government to get a border wall built, you might say, but I digress!)

Obama and Miranda go way back—the duo first met at the White House in 2009 when Miranda previewed some songs from a little musical he was writing about Alexander Hamilton, and Barack and Michelle introduced the cast of Hamilton at the Tonys in 2016. 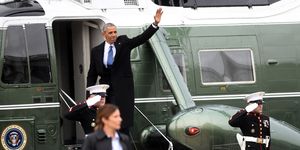 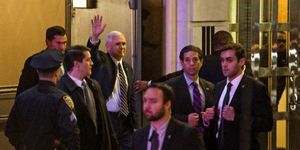 The Cast of 'Hamilton' Had a Message for Pence
This content is created and maintained by a third party, and imported onto this page to help users provide their email addresses. You may be able to find more information about this and similar content at piano.io
Advertisement - Continue Reading Below
More From Culture
The 25 Hottest Movies on Hulu Right Now
'Ginny & Georgia' Season 2: Everything We Know
Advertisement - Continue Reading Below
There's a UK Version of 'The Circle'
Bethenny Frankel Is Minding Her Own Business
Historical Films to Stream If You Loved 'Hamilton'
The Top-Grossing Book-to-Movie Adaptations
A Look Back at Princess Anne's Life in Photos
Is Jack From 'The Circle' Cousin Greg?
Cristin Milioti & Billy Magnussen Play Trivia
The Most Unmissable Movies of 2021 (So Far)