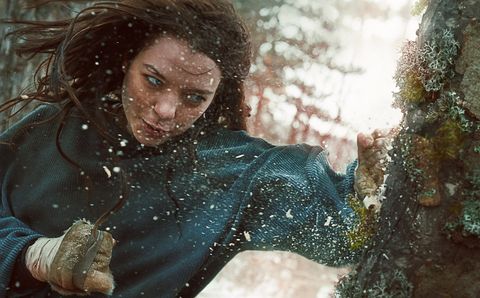 It's kind of a weird idea, on its face: Basing an entire prestige series on a movie that came out years ago. That's pretty much all I knew going into my first viewing of Hanna, the new Amazon Prime show based on the 2011 film of the same name by Joe Wright. I knew that the original starred Saoirse Ronan and Eric Bana—both excellent selling points—and that it told the story of a young girl who'd been trained since birth to be an assassin. Turns out you don't need to know much more than that to get really into the new version: By the middle of the first episode, I was hooked. There's something about Hanna's raw energy that grabs you so you can't look away. She takes people out as easy as waving hello. In fact, Hanna single-handedly inspired me to get in better shape, put my phone down, get in touch with nature, and trust no one. And that's all by the end of the first episode!

In the series, we meet Hanna as an adult in the woods. During a daring escape, she makes a new friend, Sophie, and then has to continue on her mission, traversing borders and trying really hard not to get murdered. It's badass and addictive, and completely anchored by its lead actress, Esme Creed-Miles.

I had the opportunity to speak with Creed-Miles, 19, a relative newcomer from England, and quickly realized why her essence makes her perfect for this role. She's just so cool. We chatted about her intense training for the role, whether it was intimidating to remake a movie with a cult following, and her love of music. And trust me: Once you watch Hanna, you'll understand why you're about to see a lot more of Esme.

On Doing Her Own Fight Scenes

"It was a process before [shooting]. I had a few months of physical prep where I was training six hours a day—I was doing an hour and a bit of yoga, I would do a couple hours of cardio and weight-lifting, and then I would do an hour or maybe two of martial arts training. I had a huge bank of skills to learn and then bring to my choreography, which was actually really fun. You learn a fight choreography and then you rehearse it over and over again, and just try and perform it to the best of your ability in front of a camera. And sometimes it was frustrating, because it was such a new thing and I had to progress throughout the show and keep up the training while shooting."

"But it was really important to me because those physical elements are so inherent to Hanna’s whole character that I did as much of it as I could and that was actually, you know, safe for me to do. So it is mostly me on screen. I think it provides it with a kind of visceral, animal-like quality that's really fun to watch. You know, you might not necessarily be nailing the move exactly, but if you’re performing that move with conviction and aggression and enthusiasm, it really is more convincing."

On Remaking a Cult Film

"It was slightly intimidating, but when I work, I’m so engrossed in what I’m doing that I kind of abolish the context of when and where and why I’m doing it. I was so immersed in the day-to-day of the production of it that I didn’t really concern myself with the final product or it’s reception.... But now obviously that the show is coming out, it’s almost overwhelming rather than when I was doing it, because it’s like, ‘Oh this is the real thing and people are going to watch this.’ All of a sudden there are billboards, and it’s kind of crazy. When I was shooting it, it just felt like I was going to work."

"Well Rhianne is one of those...[Laughs.] Like, she’s so good that you don’t really have to do anything, you can just sort of react to whatever she’s doing. She was improvising all the time. Most of our scenes are completely improvised, so we would just sort of vibe off each other which was really, really fun. There was a real sort of on-screen chemistry and I hope people can see that it."

On the Show's Home, Amazon

"I think it’s great because [Amazon] sort of transcends borders. I mean, anyone can watch it and that’s really fantastic. I think it allows a flow of ideas and I think also, the political climate at the moment, where lots of people are leaning towards ideas of nationalism and trying to enforce borders and encourage this, I guess, insular mindset—I think it’s really liberating to have streaming services that are able to sort of communicate and translate stories globally. Especially with the documentary platforms, I think it’s hugely powerful to be able to take ideas and spread them as far as you can. The show will be in more than 200 countries."

On Her Other Love, Making Music

"I write music and I work collaboratively with two friends of mine and we’re currently just sort of working on demos and seeing where we could take those.... I just love listening to music and talking about it, so my social media is mostly dedicated to talking about songs and stuff that interests me. Even if it’s about film or TV. I mean, we had Karen O doing music for this, and I got to meet her and she’s just legend. Music informed everything for me—when I was even on the show I always had my headphones in. Sometimes I would even disguise my Airpods underneath my funny furry hat and no one knew about it. It was so cool to be listening to, I don’t know, some Cocteau Twins song while I was running through the Slovakian wilderness."

On Watching Herself On-Screen

Related Story
Every Great TV Show of 2019
This content is created and maintained by a third party, and imported onto this page to help users provide their email addresses. You may be able to find more information about this and similar content at piano.io
Advertisement - Continue Reading Below
More From Culture
Could 'Manifest' Come Back for a Fourth Season?
'Bachelor In Paradise' 2021: Everything We Know
Advertisement - Continue Reading Below
Read an Excerpt From 'We Were Never Here'
How to Join Marie Claire's Virtual Book Club
See Inside Julianna Margulies's Personal Library
The Most Unmissable Movies of 2021 (So Far)
The Eternal Sunshine of Juno Temple
Let's Talk About That 'Virgin River' Cliffhanger
Zendaya Shared a Teaser of 'Euphoria' Season 2
'Ginny & Georgia' Season 2: Everything We Know