Today's Top Stories
1
Can Tayshia Adams Steal You For a Sec?
2
People Have a Lot of Feelings About 'I Care a Lot'
3
Watch Prince Harry's Interview with James Corden
4
Found: All-Natural Makeup Brands That Deliver
5
The Founder Who Got Meghan Markle to Invest
Hulu

Some background: For most of her life, Gypsy was under the impression that she had leukemia, muscular dystrophy, and a host of other illnesses. Her mother Dee Dee had told her so. Gypsy didn't even know her real age. She was, it later emerged, perfectly healthy.

Dee Dee is thought to have had Munchausen syndrome by proxy. After finding out the truth—that she was in good health and much older than expected—Gypsy conspired with her internet boyfriend Nicolas Godejohn to murder Dee Dee.

The real Gypsy Rose Blanchard is currently serving a 10-year sentence at the Missouri Chillicothe Correctional Center. But she could be up for parole as early as 2024.

Although The Act dramatizes her story, Gypsy won't benefit fiscally from the show—at least, that's according to Gypsy's stepmom Kristy Blanchard. Kristy spoke to Vulture and claimed that Michelle Dean, author of the investigative BuzzFeed article on Gypsy Rose and one of the co-producers of The Act, had initially suggested half the proceeds from the show go to the Blanchards.

"We were on a phone conversation, and she had told me that whatever she made, it didn’t matter what it was, she was gonna send us 50 percent of what she made and she was gonna keep 50 percent," Kristy Blanchard claimed. Dean hasn't commented on any of Kristy's claims.

As for Gypsy, she hasn't spoken out about the release of The Act. She isn't able to watch the show from prison, but she's not particularly happy with its existence, as she stated in an email to Bustle. "I feel it is very unfair and unprofessional that producers and co-producer Michelle Dean has used my actual name and story without my consent, and the life rights to do so," Gypsy said.

In the statement, Gypsy also threatened legal action. But her stepmother and Marcelli have walked back from that. "It was from her own place of anger and disappointment and frustration," Marceilli told Vulture regarding Gypsy's statement. "Nobody is taking legal action."

You can stream the The Act on Hulu now.

Related Stories
Wrap Yourself Up in a Cozy Burrito Blanket 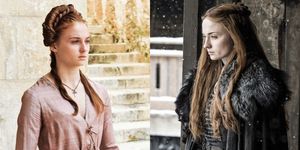 The Hidden Meaning of Sansa's Style Evolution
Trade In Your Sandals for These "Dad Sneakers"
This content is created and maintained by a third party, and imported onto this page to help users provide their email addresses. You may be able to find more information about this and similar content at piano.io
Advertisement - Continue Reading Below
More From Culture
'Behind Her Eyes': Is Astral Projection Real?
The Book-to-Movie Adaptations to Catch This Year
Advertisement - Continue Reading Below
The Best Easter Egg in 'Behind Her Eyes'
Breaking Down the Ending of 'Ginny & Georgia'
68 Movies That Are Just Fully About Sex
Could 'WandaVision' Get a Second Season?
Is Wellsbury From 'Ginny & Georgia' a Real Place?
People Have a Lot of Feelings About 'I Care a Lot'
The World According to Billie
Will There Be a Season 2 of 'The Queen's Gambit'?