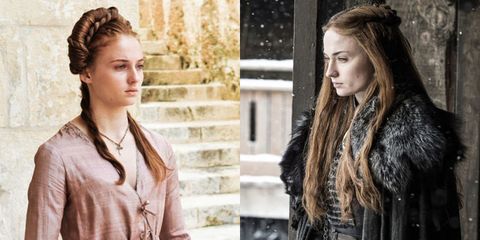 For seven nail-biting seasons, Game of Thrones' Sansa Stark has been through everything Westeros could possibly throw at her —and she's handled it with grace, dignity, and a wardrobe that reflects what she's been through. Everything Sansa wears, from her jewelry to her most luxurious gowns, has hidden meaning, whether it's symbolic of her lost innocence, her commitment to her family, or the abuse she suffers in later seasons. Ahead, your guide to how Sansa's style has changed, and what these looks really ~mean~.

When we first meet Sansa Stark, she's dressed in blues and furs—a classic Northern lady, which is exactly what she was.

When it's time to get some face time with her (planned) future mother-in-law, Cersei, Sansa goes all out. She wears her best clothes, ruffles and all. This instance of trying just a little too hard is classic Early Sansa. She was the girly girl who was ready to do anything to move up in station (and south in geography).

As Sansa begins her journey away from her home in the North, her style becomes more Southern, but her color palette doesn't. This is a girl who is true to her roots, no matter how eager she thinks she is to move on.

Sansa's high necklines and bunches of ruffles look out of place with a sunny backdrop. She might have been ready to move on, but she still sticks out as an outsider. She'll have to really learn to blend in if she wants to survive (~foreshadowing~).

It's not long before Sansa is embracing the style and color palate of King's Landing, but let's not ignore that rose-embroidered neckline, which might just have foreshadowed the protective role the Tyrells would play in Sansa's life after her father (Ned, sitting on the right) died.

When things start to get dire for Sansa and her family, her fashion starts to reflect her desire to hide. The loose-fitting gowns and giant sleeves that seem to swallow her up are all in line with Sansa's desire to become invisible at court.

Even in mourning, Sansa doesn't wear black. In fact, she goes the complete opposite, wearing a cheery, rosie pink. This is the first sign that Sansa knows she has to hide her true feelings if she wants to survive under Joffrey's rule.

By Season 2, Sansa was wearing the same style, but subtly inching back toward the greys and blues she wore when she lived at Winterfell—maybe this was her silent way of saying she was still a Stark, no matter how much she pretended to want to be a Baratheon.

Season 2 also marks the beginning of Sansa's physical abuse, along with the escalation of her emotional abuse. In one memorably horrible moment, she's beaten and her clothes are ripped from her body in court. If Sansa's clothes have been her armor and her way to hide, this moment proves that hiding won't be enough. She'll have to learn to play the game.

When Sansa gets her period for the first time, she's wearing the same pale blue she favored in Winterfell—a color we won't see her wear again. Goodbye, childhood.

In Season 3, purple becomes Sansa's signature color. Maybe it's her way of trying to mix Lannister red with Winterfell blue. Maybe it's an expression of how she's growing up and becoming a darker person. Maybe it symbolizes the fact that she's royalty in her own right (can we get a "Queen of the North" chant, please?), even as she's being abused in another court.

Season 3 also sees Sansa repeatedly sporting a dragonfly necklace that becomes something of a signature for her. Like butterflies, dragonflies undergo a metamorphosis before emerging as beautiful, winged creatures. Sound like anyone else we know?

At Sansa's wedding to Tyrion, she wears one of her most beautiful and most symbolic dresses of the series. It's gold (which makes it impossible not to think of the always-debt-paying Lannisters) and trimmed with lions, the Lannister sigil. The family is clearly sending Sansa a message: you belong to us now.

At Joffrey's ill-fated wedding, Sansa is still wearing her signature dark purple—a sign that she wasn't expecting her life to change that day.

During most of her stay in the Eyrie, Sansa wears a cloak over her dress. This is significant because the Eyrie is the place where Sansa learns to put all the powers of deception and manipulation she learned in King's Landing to use.

At the end of Season 4, after helping Littlefinger cover up her Aunt Lysa's murder, Sansa reemerges with a new, bold style: a stunning black dress with feathered sleeves, a homemade statement necklace, and darker hair. At this point, she's ready to embrace the dark side—working with Littlefinger.

When she returns to Winterfell in Season 5, Sansa maintains her dark look, but tones down her feathered shoulders, covering her dress with a cloak, as if to symbolize the loss of power she feels around the Boltons.

Sansa's cloak also underscores her desire to be invisible. Having been on the receiving end of the Boltons' cruelty, she wants to stay out of sight as much as possible.

On the night of her wedding to Ramsay Bolton, Sansa wears a gorgeous white gown with a fur shawl—very much in line with her Northern roots. However, almost every inch of skin is covered by layers and layers of fabric, like armor against the union.

It's important to note that this is the last time we'll ever see Sansa wearing lighter colors. After all that she's been through, her marriage to Ramsay Bolton marks the official end of Sansa's innocence. The Sansa that we know now has an edge to her, with darker fashion to match.

When she escapes Winterfell, Sansa wears an outfit that looks like something taken from her mother, Catelyn's, closet. That's fitting, since the strength it takes to make a break for it is very reminiscent of the late Stark matron.

In Season 5, Sansa meets with Littlefinger to hear his apology for leaving her in Ramsay's psychotic hands, and she dresses in sleek, dark clothes to match his. They're equals when it comes to playing the game.

When it's time for the Battle of the Bastards, Sansa rides out to watch the war looking every bit the part of a Northern general. This is the first time we see Sansa in the thick furs we associate with the power players in the North because she's finally ready to be one.

After Sansa orders Littlefinger's execution in season 7, we see her overall energy totally shift. She's become much more calculating and guarded as a result of everything she's been through, and that steely attitude is reflected in her style.

Season 7 also sees Sansa dressing a lot like the show's other badass women, such as Daenerys and Cersei. She's wearing all black, battle-ready clothes, but accessorized with fur because, of course the North remembers.

The frills and bright colors of Sansa's youth are long gone, replaced by the dark uniform of the North. Rather than running away from her heritage like she did as a child, Sansa decides to embrace it, embodying the fierce direwolf that is the symbol of the House Stark.