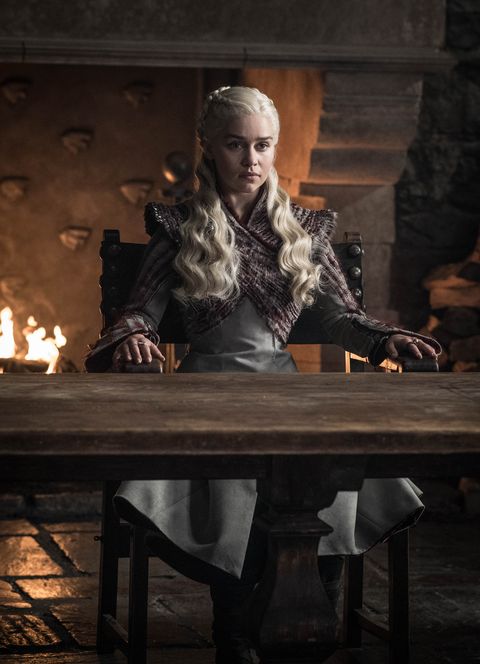 After seven long seasons of keeping my two cents to myself, I have a confession to make: I don't like Daenerys Targaryen. There! I said it. I've always found her somewhat irritating, but after the season 8 premiere of Game of Thrones last Sunday, I'm ready to stand in my truth: Daenerys isn't fit to rule the Seven Kingdoms.

I can already hear the protests now. "But she's next in line! She's worked so hard for this! She can walk through fire! ShE hAs DrAgoNs!!" I hear you, truly I do. I understand why the Dany-hive is so passionate about their khaleesi—she's proven herself to be a formidable challenger in this game. Daenerys survived the blaze of her husband's funeral pyre, hatched a few dragons (for the first time in ages), rallied the Unsullied, and now commands a gigantic army, among other things. I get it. She's cool or whatever.

What's not cool is her obsession with steamrolling whoever stands in her way in order to reclaim the Iron Throne. Daenerys' moral compass is shot, folks, and it's time to talk about it.

One of the most interesting aspects of Game of Thrones is that almost all of its characters are operating on a sliding moral spectrum. In Westeros, there is no such thing as completely black or white, right or wrong. Depending on the situation at hand, we've seen good people do bad things and vice versa. Take the Hound as an example. The Hound, a seemingly "bad" person, protects Sansa from predators in Flea Bottom and teaches her little sister Arya how to fight. Arya, held near and dear to the fandom as one of the few good characters on the entire show, repays his kindness by attempting to kill him—she redeems herself by sparing the Hound (not without robbing him first) and focusing her murderous energy elsewhere. The only truly evil person in Westeros is Joffrey, and he got exactly what he deserved. (I personally think they went easy on Joffrey based on all the terrible things he put so many through, but I guess I'll take what I can get.)

Unlike Joffrey, Daenerys has had plenty of good moments. She is strong and determined, inspiring even; I was *this* close to getting back on Bumble after I saw that "keep your Queen warm" moment with Jon Snow during their impromptu mini-baecation to the mountains. However, Daenerys' penchant for violence and total subjugation leads me to believe that she may actually be Mad Queen than Rightful Queen. There have been several instances in her quest for the throne that underscore her tyranny tendencies, but it was her entrance to Winterfell in the first episode of the season 8 premiere that really screamed "I will literally kill every single person here if you don't do what I say!"

When Jon leads Daenerys, her dragons, and her army up North for the first time, the group receives an icy welcome from Winterfell. Sansa, the head of House Stark in Jon's absence, isn't impressed by the band of warriors—they're from out of town, they're brown (#MakeWinterfellGreatAgain), and they're led by a Targaryen. Daenerys puts on a smile for the lady of the house but makes sure to let Jon know what's up. "She doesn't need to respect me, but I am her queen," she tells her lover/nephew plainly. "If she can't respect me..."

If she can't respect you what, Daenerys? You're going to burn Sansa alive like you did Samwell Tarly's family?

Oh, did y'all forget that little fact? Daenerys had Drogon barbecue Sam's father and brother alive in season 6 when the men of House Tarly joined forces with the Lannister army to take down Daenerys and the Unsullied. Despite not being on the best of terms with his family, Sam is obviously devastated by the revelation, and Ser Jorah appears visibly uncomfortable when he realizes what's happened. Daenerys' gaze never wavers, even as Sam is brought to tears, and it's obvious that she has no qualms about turning the men of House Tarly into human shish kebabs just because they refused to bend the knee.

Samwell - “well at least I got my brother still”

Daenerys isn't bothered by the idea of taking lives to achieve her goal, but guess who is? Her lil boyfriend, Jon Snow. When Sam tells him of Daenerys' execution, Jon is stunned, offering his best friend a sincere apology for his loss—have you ever heard Daenerys apologize for anything? Sam is convinced that Daenerys is not suited for the throne, and he honestly makes some good points. Like his dad/uncle Ned Stark, Jon knows how to lead people with compassion; he may have shanked a few rebels here and there, but for the most part, Jon has a good heart and genuinely does not enjoy killing other people. He has experience in battle, plus he's seen the Night King and his army up close. More importantly, he has a legitimate claim to the Iron Throne because he's really the son of Rhaegar Targaryen and Lyanna Stark. Jon's fit to rule the Seven Kingdoms for more reasons than one, and the fact that his moral compass seems to be actually working is at the top of the list.

Dany-hive, I know that you love your girl and that you've been riding for her from the beginning. I respect the loyalty! It's just time that we acknowledge that Daenerys' behavior over the past few seasons has been more of someone with an overinflated ego and an limitless sense of entitlement than that of a ruler with the well-being of their subjects and land in mind. If I can really spill the tea, she's acting a lot like the Mad King as well as Cersei, who's currently acting all type of the fool on the Iron Throne. Violence may be a necessary evil, but like...do we really have to burn everybody alive? Is that really what we want for Westeros? IDK, girl.

Related Stories
Elmo Just Won the Game of Thrones
RIP to Jason Momoa's Beard, Gone But Not Forgotten
A New Cersei Theory Is a 'Game of Thrones' Twist
This content is created and maintained by a third party, and imported onto this page to help users provide their email addresses. You may be able to find more information about this and similar content at piano.io
Advertisement - Continue Reading Below
More From Culture
Anne Hathaway & Elizabeth Nyamayaro on Compassion
When You Can Expect New Episodes of 'The Circle'
Advertisement - Continue Reading Below
'Ginny & Georgia' Season 2: Everything We Know
Get to Know Courtney From Season 2 of 'The Circle'
'The Circle' USA Is Actually Filmed In the U.K.
The 25 Hottest Movies on Hulu Right Now
There's a UK Version of 'The Circle'
Bethenny Frankel Is Minding Her Own Business
A Look Back at Princess Anne's Life in Photos
Historical Films to Stream If You Loved 'Hamilton'