Spoilers ahead for Game of Thrones season eight. For years now, Game of Thrones fans have been speculating about the big narrative endings of the show: Who wins? Who dies? What on earth is going on with the Night King? And perhaps the most important: How is Cersei going to die?

I'm only kind of kidding. Ever since Cersei blew up the Sept of Baelor and seized the Iron Throne for herself, she has just been straight up evil (as opposed to passive aggressively evil, which is how she started). She's directly or indirectly responsible for a loooot of beloved character deaths, and it would please fans very much to see her meet a dismal end. One fan has a theory about this that seems extremely plausible to me, and just blew my mind.

Unlike her terrible terrible son Joffrey, Cersei's not a fully unempathetic character—and, though it's not made explicit in the show, the full prophecy that she heard as a child includes some pretty important clues as to her fate, thanks to George R.R. Martin. It's called the Valonqar (High Valyrian for "little brother") and, in addition to talking about how Cersei will be the queen and have three children who will die, it also foreshadows her fate. "And when your tears have drowned you, the valonqar shall wrap his hands about your pale white throat and choke the life from you."

Now, most people have taken "valonqar" to mean Jaime or Tyrion, because, literal translation, they now both hate her, etc. But thanks to Reddit (where GoT theories and conversation abound), one Redditor had a very intriguing theory that puts quite the spin on the traditional thinking. "What if she’s pregnant with another son, and while giving birth to him, she dies," goes the idea, according to Namez_Are_Hard. "She is killed by the Valonqar. Nowhere in Mags prophecy does it say HER valonqar, just THE valonqar."

Technically, Cersei's child would be a younger brother to her now-dead children Joffrey, Myrcella, and Tommen. Now that I'm running it through my brain, that actually makes total sense. And it is horrrrific.

Okay, hear me out for a second. I realize Cersei is a hated character, and rightfully so. But this would be so tragic. And it would make sense—Martin/show creators David Benioff and D.B. Weiss have foreshadowed from the very beginning that Cersei's one redeeming quality was her children—"That and your cheekbones," according to Tyrion (lol). So for her to have one small piece of hope that her life can continue beyond the prophecy, one reason to not be the most terrible person of all time, and to have that thing kill her? Devastating.

Of course, for this theory to be true, Cersei will have to be somewhat farther along than she is now—Euron couldn't even tell she was pregnant—so that would mean that this season spans months, not just weeks. So, it's a bit of a stretch, but I kind of love the play on words that would make Martin the smartest writer of all time, in my opinion. 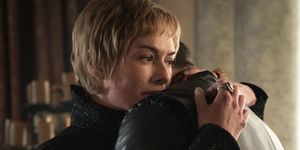 What We Know About 'Game of Thrones' Season 8
Katherine J Igoe Katherine’s a Boston-based contributing editor at Marie Claire online who covers celebrity, fashion, entertainment, and lifestyle—from “The Bachelor” to Everlane to Meghan Markle.
This content is created and maintained by a third party, and imported onto this page to help users provide their email addresses. You may be able to find more information about this and similar content at piano.io
Advertisement - Continue Reading Below
More From Celebrity
Meghan Markle Expresses Sympathies to the Queen
Prince Harry Remembers Prince Philip
Advertisement - Continue Reading Below
Prince William Statement on Prince Philip's Death
Meghan and Harry Are Facing Security Threats
Selena Gomez Is Drenched in Fake Blood on Set
Amanda Seyfried Talked About Having Panic Attacks
Harry Arrives in the U.K. For Philip's Funeral
Matthew Perry Deletes 'Friends' Reunion Instagram
The Queen's Corgis Are Helping Her With Her Grief
Charles is Looking Forward to Seeing Harry Again