Remember the good old days when Jon Snow knew nothing? Those days are over now that one of biggest secrets in Game of Thrones is finally out: Jon is actually a Targaryen. But where does that leave the Starks, the only family that our (former) King in the North has ever known?

From the moment that Ned Stark brought the curly haired newborn to Winterfell, Jon's whole life has been a struggle. His stepmother (step-aunt?) Catelyn treated him like an outsider until the day she died, furious at the existence of a child born from betrayal. His siblings—well, mostly Sansa—isolated him, dubbing Jon "The Bastard of Winterfell." The clandestine nature of his birth followed him even to the Wall, where he joined the Night's Watch and took a lot of crap from his fellow Watchmen. It's a hard knock life, indeed.

However, best bud Samwell Tarly's shocking admission in the season 8 premiere that Jon is 1) not a bastard at all, and 2) not even a Stark changed everything. Now that we know that Jon is really Aegon Targaryen, Sixth of His Name, Protector of the Realm, and the rightful king of the Seven Kingdoms, what does this mean for his family?

Jon is already dealing with dissent amongst the people of the North; they're furious with him for bending the knee, to a Targaryen at that. Northern folk are notoriously suspicious of outsiders—omg did y'all see how they were glowering at Greyworm and Missandei? are there no brown people in the North?—so Jon's decision to bring an entire army of hungry soldiers, two whole dragons, and their queen definitely added insult to injury. Even little Lyanna Mormont, who really should stay out of grown folk's business IMO, had some harsh words for Jon about his lack of judgment: "You left Winterfell and came back a...I'm not sure what you are now." Okay, Miss Thing...you may be in charge of House Mormont, but it's past your bedtime. I know you see grown folks talking here.

While Jon may have expected a frosty welcome from Winterfell's allies, his siblings weren't much better. Sansa became the head of House Stark in his absence, and she mean-mugged Danaerys so hard that I thought her eyes were going to fall out. She was happy to see Jon but displeased by his loyalty to/obvious heart eyes for the daughter of the Mad King. Bran, a.k.a. the Three-Eyed-Raven with a really bad staring problem, seemed unaffected by Jon's arrival; since he'd confirmed that Jon is a Targaryen, Bran felt no attachment to his older brother at all. Typical. Of the remaining siblings, Arya was the most excited to see Jon, but she still goes out of her way to remind him that he is, before anything else, a Stark. About that...

Knowing what he knows about his true heritage, what's a guy to do? Jon has never been one to covet the throne—he only cares about defeating the army of the undead making a beeline straight for the North—but everything that he knows about himself is a lie. If Jon decides to step into his fate as the rightful heir of the Iron Throne, he'll have to forsake his family as well as his old life at Winterfell.

As a Targaryen, he's different, special even. He can ride dragons! Claiming his Targaryen ancestry will definitely prove a hard task for Jon, a man who lives and breathes House Stark. But, if anyone can unite the Seven Kingdoms to fight the Night King and his army of wights, Jon Snow can. He could win it all.

Now...who's going to break the bad news to his girlfriend?

The final season of Game of Thrones airs every Sunday night on HBO. 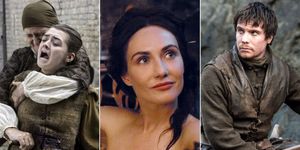 11 Game of Thrones Plot Holes
This content is created and maintained by a third party, and imported onto this page to help users provide their email addresses. You may be able to find more information about this and similar content at piano.io
Advertisement - Continue Reading Below
More From Culture
The Ultimate Ranking of 'GOT' Sex Scenes
The Cast of 'The Nevers' Plays Trivia
Advertisement - Continue Reading Below
The Most Exciting New TV Shows of 2021
Get to Know Delessa From 'The Circle'
36 Movies With Super-Romantic Sex Scenes
Anne Hathaway & Elizabeth Nyamayaro on Compassion
When You Can Expect New Episodes of 'The Circle'
'Ginny & Georgia' Season 2: Everything We Know
Get to Know Courtney From Season 2 of 'The Circle'
'The Circle' USA Is Actually Filmed In the U.K.