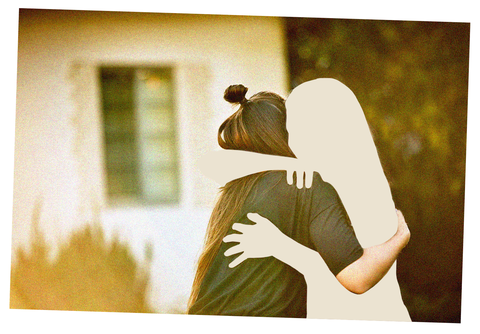 Our editors have recently been obsessing over Andrea Dunlop’s new novel, We Came Here to Forget, which tells the story of a family confronting the confusing, terrible truth about one of their daughters: that she suffers from Munchausen by proxy—a disease that’s all over pop culture right now (Sharp Objects, The Act), but about which little is known. Read an exclusive excerpt from the heart-wrenching new book, out July 2, below.

The final day of my visit was a sunny one, and Penny and I took a long walk along the lakeshore, Ava bundled up to protect her from the bracing air. She was livelier that day and when Penny and I stopped to rest for a while on a bench, she squirmed ferociously in my sister’s lap, making us both laugh as she reached for and burbled at the geese who strutted along nearby. The moment of normalcy was like a sliver of light. Maybe everything would be okay.

On the way home, I stopped by the grocery store to pick up protein bars and tried my mom’s cell to see if she needed anything. She didn’t answer. I tried my dad. Nothing. But when I arrived home, both cars were there. In the middle of the day.

We Came Here to Forget: A Novel
Atria Books amazon.com
READ IT

“Mom? Dad?” I called through the foyer. “Hi, buddy,” I said, leaning down to scratch Barry’s ears.

I came down the hallway and was greeted with the strange sight of my mom and dad sitting side by side at the ancient dining set. I noticed with alarm that my father’s eyes were red-rimmed. “Hi, honey,” my mom said. “Can you sit with us for a minute? We need to talk to you about Penny.” I lowered myself numbly into the chair next to my mom and could feel the dam I’d been patching over for months—years—to forestall this very moment finally bursting. I felt tears springing to my eyes, my breath quickening.

That afternoon while I’d walked with Penny and Ava in the park, my parents had been to see Doctor Anderson, our family practitioner of over two decades. They’d laid out for the kind doctor all of the many moments that I’d been trying for years to convince myself were isolated incidents, the products of growing pains and bad boyfriends. Taken together, they added up to a horrible, unspeakable truth.

Penny wasn’t simply unlucky, she wasn’t just a worrier or a hypochondriac. She likely suffered from a mysterious disorder known as Munchausen syndrome by proxy, a grotesque and terrifying disorder that had been a subplot in a popular late 1990s horror film. Her unfortunate health history hadn’t been some bizarre curse; it had been her creation. And when Ava was born, her focus had shifted to the baby. There wasn’t a great deal known about the disorder, but Penny fit the profile: female, white, middle class, with a job in the medical profession.

“What the hell are we going to do?” I asked my parents. Without realizing it, I’d clasped my mother’s hand and was squeezing it so hard my knuckles had gone white.

“We’ll get her help,” my dad said, trying to sound certain. “We’ll stick together. We’ll get through it.” In our minds, Penny was a victim as well as Ava. Her own mind had turned on her; we just needed to make her see.

I went to take a shower and found myself screaming, the echoes ricocheting off the walls and bringing my poor parents running to the bathroom door. This syndrome was the only thing that made the last ten years of life with Penny make any sense at all, and yet, how could this be true? Where did we go from here? The next day, in what I now recognize as a stunning act of bravery, my mother went to speak to Ava’s pediatrician, her third in as many months.

My mom filled him in on Penny’s troubling history with illness, and most crucially, the pregnancy, which, my parents at last explained to me, had likely never been real. The doctor appeared to calmly absorb the information, and my mom left his office frustrated and fearful that he didn’t believe her. What she didn’t know was that he legally couldn’t tell my mother how deeply alarmed he was and that once she’d left his office, he’d alerted a hospital authority called the SCAN team—a task force of doctors at Children’s that handled suspected child abuse and neglect—who’d subsequently called Child Protective Services. But this would all come out later.

It was her husband Stewart who called me in Park City, his voice hysterical. “Katie, they took Ava, they took Ava. Oh my god, oh my god.” At first, Penny cried to us too, but as the details burbled forth, she quickly turned. My mother’s name was all over the paperwork as the person who’d alerted the doctors.

And for all of us, there was no going back.

Related Stories
Hulu's 'The Act' Is Based on a True Story
'Sharp Objects' Ends With a Terrifying Reveal
This content is created and maintained by a third party, and imported onto this page to help users provide their email addresses. You may be able to find more information about this and similar content at piano.io
Advertisement - Continue Reading Below
More From #ReadWithMC
'We Were Never Here' Will Cure Your Wanderlust
How to Join Marie Claire's Virtual Book Club
Advertisement - Continue Reading Below
Get Hooked on 'The Heart Principle'
Obsessed With the Olympics? Read These Books
'Skye Falling' Should Be on Your Summer TBR List
Read an Excerpt From 'We Were Never Here'
The LGBTQ+ Authors We Can't Stop Reading
'The Other Black Girl' Is Highly Relatable
Read the First Chapter of 'Skye Falling' Here
Life-Changing Books Everyone Should Read