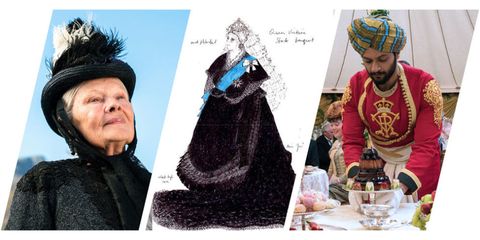 The internet is already low-key obsessed with Queen Elizabeth II and the Duke and Duchess of Cambridge, but let's not forget about the leading lady who made her mark way back in the day. Enter: Queen Victoria. She reigned for 63 years during the aptly-named Victorian era, and her story is loosely portrayed in the newly released film, Victoria and Abdul (which stars Judi Dench in the titular role).

Here, Oscar-winning costume designer Consolata Boyle gives MarieClaire.com an exclusive peek at her sketches for the film, along with an inside look at her design process.

On getting to check out Queen Victoria's real clothing (because apparently she was a hoarder and kept everything).

"I researched very broadly into the social climate of the Victorian era, as well as the political sphere, and visual elements around the court and the royal family at that time. Queen Victoria was a great collector and a hoarder—she kept all of her pieces in very, very good condition (especially her jewelry). You can be overburdened with masses of research and it can all be very impressive, but it's about what you actually do with it."

On how Victoria and Abdul's intimate friendship influenced her designs.

"There were some images of him actually in her bedroom, which were absolutely extraordinary. All of this is part of a puzzle and web we weave, and can only imagine. The letters she wrote to him, and how she signed those letters as 'my beloved son, come back and hug me'—they were very close. It was a very deep friendship. And all of that was wonderfully surprising and added very much to the texture of what we were doing."

On whether Victoria and Abdul were just friends, or lovers.

"I think we will never know. That is the complete mystery of it. She was always a very sensual woman. She deeply loved [her husband] Albert and was completely devastated by his death. She was capable of a lot of love, and that is one thing that is absolutely important about Victoria. And I think from that, some things could be extrapolated—but I would be wary of going too far around the level of their relationship towards the end of her life. It was a very deep friendship—a very deep, silly old friendship. And obviously she was close to her children, but her children caused her much pain. Abdul was an absolute relief from that. I would call it a very intimate friendship."

Boyle's sketch of Queen Victoria for the film.
Focus Features

On bringing her lovely sketches to life.

"I always consider costume sketches as 'working drawings.' They're based on the research and they have to be passed on to the makers so they need to make sense on many levels surrounding the aura—the more indefinable element you want to portray in something. You have to give some feeling of the detail so that it can be passed on. In Victorian women's clothes there was a massive amount of different sources of fabrics. It's monumental in its ambitions."

On drawing inspiration from previous projects, like 'The Queen' or 'The Iron Lady.'

"Part of me always likes to start a project on a completely blank sheet, so I don't carry any baggage from one project to the next. But of course everything in life and every experience you have is going to affect what you do next—it would be foolish to deny that. I think that happens simply because we're human."

"We're repeating history all the time in fashion. It's a very interesting challenge and a very enjoyable challenge to give life to something that's laden down in the burdens of history. It means you have to pick the clothes very carefully and drill deep to find things that echo it. That is a lovely challenge."

On working with Indian fabrics.

"I really enjoyed some of Abdul's later costumes—especially the pajama trousers. One of the first areas I studied was historical fabric, so I'm always fascinated by fabric in India and the subcontinents. The sophistication is magnificent. The shapes of the garments are so simple yet so utterly beautiful. I absolutely love that."