Ask Melina Matsoukas to put her directorial-feature-debut film Queen & Slim into a genre and she’ll pick “protest art.” “We’re following a legacy of so many people who have pulled the racial climate into their work and have used it as a way to create a conversation and change,” she says of the subversive, sobering political thriller that critics are praising for its authentic depiction of police brutality.

“I like to make things that are provocative and that have something to say.”

That describes much of the 38-year-old Bronx native’s work since she broke onto the scene in 2006. As a music-video director who’s worked for the likes of Lady Gaga, Katy Perry, and Solange, Matsoukas encouraged some of radio’s biggest names to channel their edgy side. She handed Rihanna the leather whip for her sexually charged 2011 “S&M” video (which was banned in 11 countries—signifying to Matsoukas a job well done). She helped usher longtime collaborator Beyoncé (they started working together on music videos more than 10 years ago) into her political era with Lemonade’s “Formation” in 2016, earning a Grammy for Best Music Video. In the same year, she partnered with Issa Rae to show genuine black female friendship on-screen with HBO’s Insecure. “I like to make things that are provocative and that have something to say, things that are political and entertaining at the same time,” she says. So when her friend Lena Waithe—they collaborated on an Emmy-winning episode of Master of None in 2017—wrote the script for Queen & Slim, “I felt like I knew this story,” says Matsoukas. “I knew that it was important to tell and that I was the best person to tell it.”

In the film, out November 27, death-row defense attorney Queen (newcomer Jodie Turner-Smith) and Slim (Get Out’s Daniel Kaluuya), the guy she swiped right on, are driving home from a forgettable first date when they get pulled over by a trigger-happy officer for a minor traffic violation. The situation quickly escalates, leading Slim to shoot the cop in self-defense. The duo go on the run, becoming emblematic of nationwide political unrest. To capture the gritty realness of the plot, Matsoukas chose to shoot in St. Clair-Superior, a Black Cleveland neighborhood where years ago she witnessed six people get pulled over in one hour; she insisted on filming in a moving car instead of using a green screen so that Kaluuya and Turner-Smith could “feel the moving road beneath them.” It’s because of these choices that Queen & Slim deftly humanizes headline news. “When you lean on authenticity,” she says, “there’s no wrong.”

Matsoukas hopes the film achieves something greater than solidifying her status as a film director (it has) and setting off Oscar buzz (ditto). “I hope this film creates change. I hope it encourages Black love. And I hope that a film like this will not be relevant even next year—that this story is something of our time.”

This article originally appeared in the Holiday 2019 issue of Marie Claire. 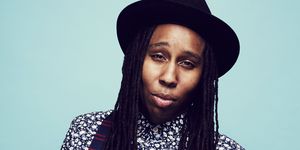 Lena Waithe On Her Historic Emmy Win
This content is created and maintained by a third party, and imported onto this page to help users provide their email addresses. You may be able to find more information about this and similar content at piano.io
Advertisement - Continue Reading Below
More From Culture
See Inside Julianna Margulies's Personal Library
Could 'Manifest' Come Back for a Fourth Season?
Advertisement - Continue Reading Below
The Most Unmissable Movies of 2021 (So Far)
The Eternal Sunshine of Juno Temple
Let's Talk About That 'Virgin River' Cliffhanger
Zendaya Shared a Teaser of 'Euphoria' Season 2
'Ginny & Georgia' Season 2: Everything We Know
Wait, Where's Hope in 'Virgin River'?
'Virgin River' Season 4: Everything We Know
The Greatest Comedy Series of All Time