Today's Top Stories
1
The Outnet Summer Sale Is the Best of the Season
2
100 Women on Why They’re Voting in November
3
Where Kamala Harris Stands on Gun Control
4
6 Easy Escapes From NYC
5
Yes, You Can Wear Glitter Nail Polish
John ShearerGetty Images

By now, you've probably heard about the upcoming movie Bombshell, which stars Nicole Kidman, Charlize Theron, and Margot Robbie. It follows the real-life downfall of Fox News chairman, Roger Alies, after more than 20 women accused him of sexual harassment. Theron plays Megyn Kelly, who worked as a Fox News anchor between 2004 to 2017. In the film, she's one of the many women that speaks out against Alies.

While we're still not over Theron's insane transformation as Kelly for the film, there's also a lot we don't know about Kelly's IRL husband, Douglas Brunt, played by Mark Duplass. For starters, the couple has been married since 2008 and has remained each other's support system throughout the years.

Here, everything you need to know about Brunt, 48, and his relationship with Kelly.

He's a former CEO of a tech company.

Brunt grew up near Philadelphia where he attended The Haverford School and graduated from Duke University. He was formerly a management consultant for the information tech company, Booz Allen & Hamilton, and served as a director with Idealab!.

However, he's best known for his position as CEO and president of the Florida-based security software company Authentium, Inc., which he led from 2001 to 2011. Brunt sold the company in 2010 for $8 million to Commtouch, now known as Cyren.

A year later, he would leave the company to focus on another passion of his: writing.

After leaving the tech company to focus on his writing career full time, Brunt published his first book, Ghosts of Manhattan, in 2013. It's about an unhappy Wall Street exec addicted to making money and became an instant New York Times bestseller. He's published two other books: The Means, a novel about how to win in politics today, and Trophy Son, a story about a tennis prodigy.

According to his website, he's currently working on his fourth book set for release next year.

The couple met on a blind date.

Before Kelly and Brunt were supposed to meet for their blind date at a tapas bar in Washington, D.C., Kelly made her friends go scope out Brunt before she arrived. (We've all been there, Megyn!) Her friends later texted her to say he was super cute and to follow through with the date. His looks weren't what won her over, though.

"He came across as sincere,” Kelly told the New York Times in 2008. “While we were talking, he leaned forward, really listening to what I was saying. He’s also clever and has a great sense of humor.”

Douglas Brunt and Megyn Kelly at the Costume Institute Gala at the Metropolitan Museum of Art in May 2016.
James DevaneyGetty Images

The pair managed a long-distance relationship while Kelly worked in Washington D.C. and Brunt worked in Florida with the tech company. When Kelly got word she was offered a job at Fox News as an anchor for in 2006, she moved to New York to start the job in the new year.

Then there was the dog incident. On New Year's Eve, the couple was walking Kelly's two Shih Tzus when Brunt lost control of one of the leashes and the dog ran into the street, almost getting hit by a car. Brunt apologized, but the couple still got into a huge fight and Kelly accused him of trying to kill her dog, per the Times.

The next day, the couple had a heart-to-heart and realized what they had was too special to pass on. Brunt had planned to propose with a nicer ring, but he couldn't wait. He ended up picking one out similar to the gem Rose wore in the Titanic at a costume store and popped the question when they were sitting seaside on a bench in New Jersey.

Throw back photo - married to this beautiful woman 10 years and 2 weeks today. Incredible wife, incredible mom. I love you.

Kelly told The New York Times, "I was so stunned that I just sat there staring at him, thinking, ‘What is he doing?"

“She took so long to answer that I thought I had just made a total fool of myself,” Brunt said.

Happy Father’s Day to @dougbrunt & all of the wonderful dads out there. For those who still have their fathers here, a chance to stop & appreciate how much we love them. For those who are not so lucky, a chance to remember. pic.twitter.com/rbzOmVWBPm

You can probably guess how the story ends, but Kelly ended up saying yes and the couple was married in March 2008. They share three children: Edward, 10, Yardley, 8, and Thatcher, 6, and they reside in New York.

As for personal interests for Kelly's leading man, on Brunt's Twitter you'll find photos of their latest vacations together, opinions on Game of Thrones, and book recommendations galore. 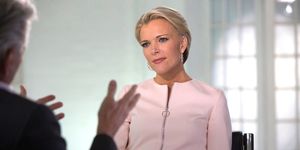