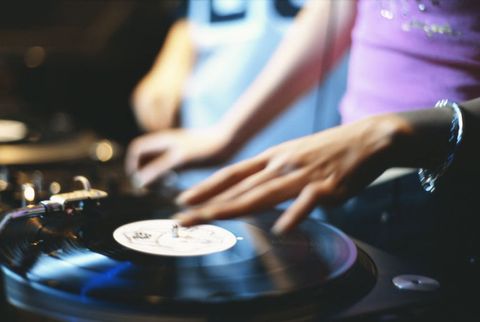 Less than a decade ago professional deejaying required a skill set that went way beyond pressing play. Then the iPod was invented, and every famemonger with iTunes and a laptop added a "slash-DJ" to his or her title — models, editors, reality television stars, you name it. This DJ-as-hobbyist trend has been pushing people's buttons for a while now, but it was when Paris Hilton took charge of the turntables at this summer's Pop Music Festival in Sao Paulo, Brazil, that real DJs the world over, well, freaked out. "It's like me calling myself a doctor from reading WebMD twice," Samantha Ronson told TMZ after Hilton's cringe-worthy performance, which included the bedazzled headphones-wearing celebutante gyrating in front of an giant LCD panel as her DJ coach (yes, there's such a thing) got on stage to salvage her set.

The truth is that even in today's tech-obsessed universe, deejaying is an art that requires so much more than putting together a killer playlist. That's the big lesson I took away from taking classes at New York's Scratch DJ Academy, where over the course of several weeks — and many failed attempts fumbling with vinyl on a set of turntables — I got a hands-on introduction to the intricate techniques every DJ should know, from scratching to mixing to looping. Let me be the first to admit: it was a huge challenge.

As a long-time music fan, I've always found the world of deejaying fascinating — how DJs carefully tell a story through their sets, building them to a climax with every changing track. Most professional DJs get their starts by shadowing more accomplished friends, but I thought that enrolling in an introductory course would be the best way for me — someone with a lot of musical appreciation but zero ability — to try it out. Even still, "I don't think you can have someone 'teach' you how to DJ," says DJ Mia Moretti, who has played everywhere from a Janet Jackson party at the Louvre to Chelsea Clinton's wedding. "I think that you can watch someone, pick up things, and you can learn the basics."

By "the basics," Moretti means the equipment, which I discovered ranges from old-school vinyl and turntables, to more modern high tech mixers, controllers, and digital software. As it turns out, there is also a checklist of seemingly innate necessities that DJs must have, including ambidexterity (for spinning with both hands), rhythm, and, of course, the ability to remember what each of the dozens of knobs, faders, and buttons in front of them is supposed to do.

Once you've figured out the gear, don't be fooled into thinking an impressive iTunes library is going to get you far. DJs need to learn the anatomy of every song they spin. Mixing requires a surprising amount of math: You're constantly counting bars and calculating beats per minute to make sure two songs can match up, and each transition between tracks is a disaster waiting to happen for any amateur. An encyclopedic knowledge of music doesn't hurt, either — the more familiar you get with each song's cue points, BPM, and verse structure, the easier they will be to mix, and the more diverse material you'll have for your set. "Explore as many genres of music as you can," Moretti advises. "Classic rock, disco, '80s electro, early '90s hip-hop. Every single song you listen to will make you a better DJ."

Not unlike playing an instrument, mastering the turntables isn't something that happens overnight. "I took six months to practice every day, then I finally said 'I'm just gonna go out and do this' and get the experience — but I could've kept perfecting it for years," says Los Angeles-based electronic DJ/producer Audrey Napoleon. Moretti has a similar perspective. "Every DJ I know has learned because they're obsessed," she says. "They've sat there and practiced scratch patterns, mixing, and beat matching, and they've studied the songs they play. If you ever hear a DJ say they don't need to practice anymore, that's bulls**t."

Then there's developing your own style, which is key, but it takes work. "I was fired after my first gig because I only wanted to play house music and the club wanted me to play Top 40," Napoleon says. "I'm very passionate, so when I play, I believe that the audience can see that. I'm a fan through and through—I just happen to be up there playing the music." That means if your sound is genuine and you're playing songs that you love, you can count on the crowd going nuts. Even if the crowd is just some friends at your apartment, which — Miss Hilton, take note — is probably the most realistic place to make your DJ debut.