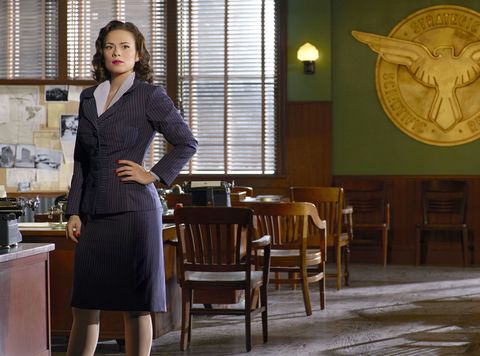 If you sort of re-edit the first episode of new ABC show Agent Carter in your head, you'll notice something interesting: Between the scenes of Agent Carter ironing her blouse and Agent Carter coming to terms with losing her boyfriend, there's Agent Carter subverting workplace sexism and Agent Carter threatening to stab a handsy restaurant patron in the artery.

In fact there's a whole squadron of female spies in movies and on TV living the sort of glossy, fearless life previously reserved for dudes who are weirdly particular about their martinis. And unlike the Bond girl—for whom "spy-adjacent" would be the most charitable description—they don't get swept along for the ride and then into the inevitable soft-focus, doing-it-on-a-bear-skin-rug love scene. They're not double-crossing femmes fatales sent by the enemy to throw off a male protagonist's game, either. What they most definitely are is kickass—literally.

They don't get swept along for the ride and into the inevitable doing-it-on-a-bear-rug love scene.

On that front, you've got Elizabeth Jennings of The Americans performing some lethal Krav Maga move while managing to keep an earth-toned, chevron-striped blouse tucked neatly into her high-rise Lees. You've got Skye from Marvel's Agents of S.H.I.E.L.D., who's indestructible in the face of a flesh-decaying obelisk and never needed tech support in her life. And you've got Scarlett Johansson's Black Widow, who back-flips down hallways and confesses nothing, not even under the pain of torture.

But for all her hand-to-hand combat expertise and taking-it-on-the-chin resilience, the most appealing thing about the Girl Spy is that she's real: A woman can care just as much about her lipstick as she does about gunning down the forces of evil or stealing state secrets for the KGB, and the writers of these characters get it.

Tough and vulnerable, confident and insecure, the GS is kind of…all of us. Because even without the go-bags and fake passports, we, as women, still slide in and out of multiple identities every day, keeping many different stories straight and maybe wearing more disguises than we should. With the GS, we get to see that multifaceted-ness reflected on-screen. We get to see that it's cool and compelling to be complicated. No bear-skin rugs necessary.

Hell Yeah, Maggie Gyllenhaal—This Globes Speech Is Such a Victorious Moment for Women