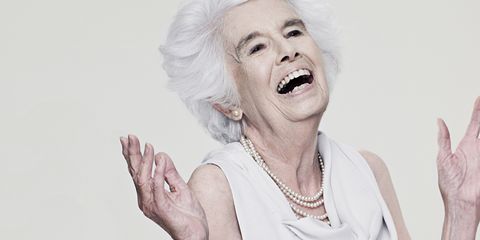 It's never too late to go after your dreams. At least not for Barbara Beskind, who at the ripe age of 91 decided to go for her dream job. "As a 10-year-old I wanted to be an inventor,'' Beskind told the Today show. "I've arrived. But it took me about 80 years."

Beskind was 10 when the Great Depression hit, and it was during that time that she learned to be creative with materials. "I wanted to make a hobby horse, and I made it out of old tires,'' she said. "I learned a lot about gravity because I fell off so many times."

Her career goals changed when a high school guidance counselor told her that engineering schools didn't accept females. So she signed up for the U.S. Army, later becoming an occupational therapist. She also wrote books and kept her creativity going by painting on the side.

But two years ago, she read about the design firm IDEO in Silicon Valley and decided that she would pursue a job with the company. IDEO is known for designing Apple computer mouses and other tech innovations. "It took me about two months to write my resume, paring it down from nine pages,'' Beskind said. "Then I wrote the letter and sent it by snail mail."

She got the job.

Now, Beskind travels into the Palo Alto office every Thursday. The company gets an email every time she comes in, and Beskind is known for giving out hugs to start the day. She sits at a couch rather than a desk, where she focuses on and tests projects related to aging.

"Our culture is telling us aging equals decline,'' IDEO associate partner Gretchen Addi told Today. "And Barbara is very solidly standing there and saying, you know, 'I'm gonna call you on that.'''

If this doesn't motivate you, we don't know what will.

Your Guide to Surviving a Layoff

Finally: a New Survey Shows Progress for Women in the Workplace