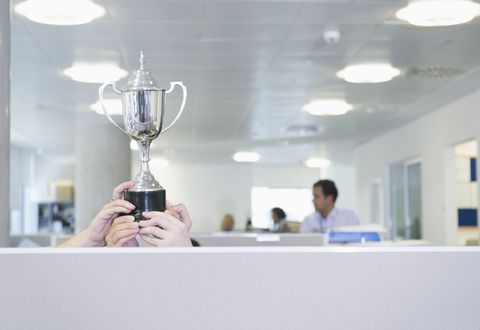 We hear a lot about the challenges facing women in the workplace (because ugh there are so many), but today, finally, there's some light at the end of the tunnel.

In an annual survey, consulting firm Accenture asked 3,600 professionals from 30 countries about their workplace environments and company cultures. And the result paints an optimistic picture of the future of women in business, and particularly in tech.

A whopping 71 percent of respondents said the number of female chief technology officers will be higher by 2030, and 52 percent said their companies are prepping women for senior management more than the year before.

Also, for the first time ever, a roughly equal number of men and women say they asked for a promotion in the last 12 months. (Though women are still less likely than men to ask for a raise, at 61 percent compared to 67 percent.) And of the workers who got a raise, more women than men said they were given more than they expected.

Thankfully, men are stepping up when it comes to gender equality, too. Almost as many men as women said they'd be stay-at-home parents if they could afford it. In general, the number was way higher than last year, with nearly half of respondents saying they'd be willing to be full-time caretakers.

These States Are Actually Doing Something About Equal Pay