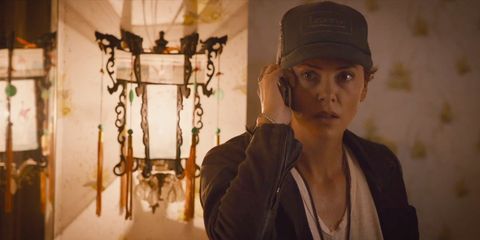 Update, 7/17: In this first scene from the screen adaptation of Gillian Flynn's Dark Places, Charlize Theron tells Corey Stoll he is full of shit because she is convinced he really did violently murder their mother and sisters. He doesn't really say anything in return, because how do you even come back from that?

Update, 6/18: Ah, okay. So Christina Hendricks is the mom in Gillian Flynn's Dark Places and Chloë Grace Moretz is the precocious teenage love interest who just so happens to belong to a satanic cult that maaaaybe performs human sacrifice Wednesdays in an abandoned barn. Cool.

The newest trailer for the film, out Aug. 7, sheds some more light on the plot (if you haven't read the book yet), while still reserving 98 percent of its Hitchcock-ian mystery for paying customers. Well, you got me, Gilles Paquet-Brenner. Watch the extended teaser here.

Original post, 3/6: Another of Gillian Flynn's books has been adapted for the big screen, and it's going to be one hell of an emotional roller coaster—again.

In Dark Places, eight-year-old Libby Day implicates her brother in the murders of her mother and sisters, which continues to haunt her 30 years later when she's an adult played by Charlize Theron. One day, Nicholas Hoult and his "Kill Club" of unsolved-case junkies approach her and plant the idea in her head that her brother might not be so guilty after all. Commence the nervous-making orchestral arrangement and the sense that nothing is as it seems.

Christina Hendricks and Chloë Grace Moretz are also in this, and they're probably playing characters who've got checkered pasts/skeletons hanging out in their closets too. Watch the trailer below, and keep your eyes peeled for a U.S. release date.

This content is imported from YouTube. You may be able to find the same content in another format, or you may be able to find more information, at their web site.
Chelsea Peng I'm Chelsea Peng, the assistant editor at MarieClaire.com.
This content is created and maintained by a third party, and imported onto this page to help users provide their email addresses. You may be able to find more information about this and similar content at piano.io
Advertisement - Continue Reading Below
More From Culture
You *Need* to Follow the 'Bling Empire' Cast on IG
Watch the Trailer for the New 'Euphoria' Special
Advertisement - Continue Reading Below
We've Getting a Season 2 of 'Bridgerton'
New Drama Movies That Promise to Move You
The Sexiest New Movies of the Year
A Look Back at Princess Anne's Life in Photos
Where Is the Cast of 'Gilmore Girls' Now?
'The Bachelor' Is Back!
Who Is "Queen" Victoria on 'The Bachelor'?
Matt James' 'Bachelor' Cast: Everything We Know