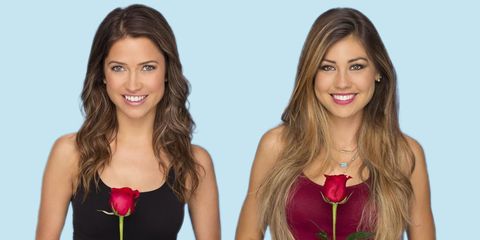 Seriously, ABC? Last night, after the final rose was given on season 19 of The Bachelor, the network teased audiences with who they would be naming the new Bachelorette. Would it be Britt Nilsson, whom fans either love or hate, or would it be Katelyn Bristowe, the clear fan favorite? As the audience cheered (and booed) to note their pick, host Chris Harrison was delighted to "shock" Bachelor Nation—there would be two Bachelorettes this season! And the men sent to woo them? "The 25 men on Night 1 are going to have the ultimate say about who they think would make the best wife," Harrison revealed.

Perfect! Just what we need! There are too many women out there calling the shots. Now we can finally give the power to the real underdogs here: the men.

I have no words.

But honestly, look: The idea of The Bachelor and The Bachelorette is pretty extreme and ridiculous in the first place, we all know that. Getting engaged after two months of infrequent visits where you don't really get to "hang out" (and talk about your love of Wayne's World or that you irrationally hate yellow skittles) but rather place all decision-making on inauthentically deep, sometimes off-putting conversations about where you are in life and if you see your future with this one person you *just* met is, well, crazy.

But it's like they've taken that which is terrible about The Bachelorette and upped the ante. Pitting two women against each other? Having men determine who will make the better wife? It's just…gross.

But this isn't the first time ABC has come under fire for its casting decisions. The last few years has had viewers demanding more diversity not only in the show's contestants, but in its stars as well. In the 19 seasons of The Bachelor and 10 seasons of The Bachelorette, there has never been a minority star—with the exception of Juan Pablo, the Latino who basically made us all wish season 18 had never happened.

In fact, in the first season of The Bachelor there was only one black woman. In season two? Two. And things haven't gotten better—this season, there was only one. And she was gone by the third episode. (The issue has even prompted an SNL skit that is so dead-on it's hilariously terrifying). Latinas have faired a bit better—Shayne Lamas, an Argentine-American, actually won the heart (and the ring) of Matt Grant on season 12, though they later called it off.

But instead of casting a black female, or a Latina, or an Asian female; instead of casting a deaf girl, or a blind girl, or a girl with autism; instead of bringing to light interesting issues and showcasing this country as the diverse place it actually is; instead of using the opportunity to bring awareness to a population, a struggle, a point of view on this huge national platform—ABC cast two women who will fight against each other to win men's approval.

It's so backwards I don't even know what to say.

You should all check out:

Is All Fair in Reality TV Love?