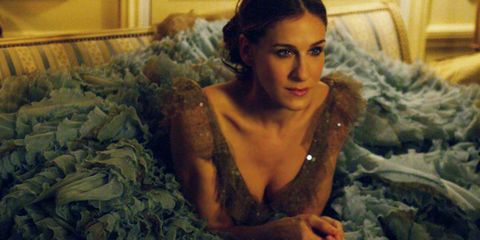 Why, why would anyone hire a flake like Carrie Bradshaw? She's not even a good writer! Her "book" was a collage of newspaper clippings and her one Vogue story required so much heavy editing that that creepy old dude probably went, "Nah, this is dragging on too long, I gotta go home and take my Centrum Silver" before he reconsidered and showed her his Versace boxers anyway because he was a determined creepy old dude.

I know you might be shaking your head. I know you might not agree with me. I know that by stating that I, Chelsea Peng, find this show to be *the worst* I might actually be kicked out of New York and media. But I don't care. And I'm not sorry.

I was a six-year-old child when SATC premiered, and watched it for the first time a decade after it went off the air (so, like, a week ago). I can tell you I feel deeply betrayed/disappointed that *this* was supposed to be the thing that would make me a fully functioning, every-reference-getting member of society. It was so boring I wouldn't even have noticed I accidentally skipped "An American Girl in Paris: Part Une" were it not for the culturally pervasive light at the end of the tunnel: the Versace mille-feuille gown.

Let's look at all the other ways this show has enriched/ruined our lives:

I've got no problem with the fashion (mostly), the pink suede sling-backs, and definitely not the progressive-for-their-time conversations surrounding sex (and when convenient, feminism), but why even make Carrie the anti-heroine if she's going to flounce all over that in her impractical, clomp-y kitten-heel mules? She sucks, and I could not possibly think of a worse role model for SATC's demographic except Breaking Bad's Walter White, but then at least he had some sort of conviction, business acumen, and a working knowledge of chemistry.

On TV, there are no consequences that can't be resolved/swept under the rug in two episodes, but IRL, it's irresponsible to glorify an unambitious, hypocritical sad sack like Carrie Bradshaw who thinks of nothing but herself but, at the same time, has no idea what she wants. Take away the Dior "Derelicte" dress, and what is she? Directionless, jobless, inner-life-less. Nothing.

By making this Carrie's Show—even though it would have been equally brilliant with just Samantha, Miranda, and, ugh, fine, Charlotte—Liz Tuccillo and company suggest it's all right if you've got no sense of accountability (financial or otherwise) as long as, for some reason, people find you charming and continue to sidle up to you on the street looking for dates every time you go outside. (Which is often because you're semi-employed and have nothing else to do but walk the streets of Manhattan and look at shoes.) Why couldn't she have asked Enid for an introduction or Carine Roitfeld's email or just the Paris bureau's address, huh? (She's scared of technology, so it's not like she could Google it.) Why couldn't she, while she was stepping in dog poop in Paris by herself, been like, "Hmmm. Does this sh*t represent my soul? Perhaps I should stop being weirdly stunted and actually develop a personality."

The fundamental problem here is leniency. Carrie let herself run away from her life to participate in an illusion of happiness and security, which did feel ugly and thrillingly real…until the writers did nothing to reprimand her for it. That's saying you can be nothing and do nothing and still end up with supposedly what you've always wanted.

Listen. I'm all for messy, complicated women who have weaknesses and screw up regularly. (See:Trainwreck, everything Reese Witherspoon's working on, etc.) But I can't get behind a show that allows a completely unremarkable ninny who demonstrates zero growth over the course of six seasons to wind up...exactly the same. No change.

Give me utter devastation. Give me a full-blown, on-her-knees breakdown on the steps of Sacré-Coeur, then Kristen Johnston showing up as an apparition or something. Give me Carrie, at their usual table, surrounded by her friends. Just give me something that's not that halfhearted quote about self-love. Because giving up is just not fabulous.

Does the Fashion in 'Sex and the City' Still Hold Up?

STOP EVERYTHING: Deleted 'Sex and the City' Scenes Have Appeared on the Internet