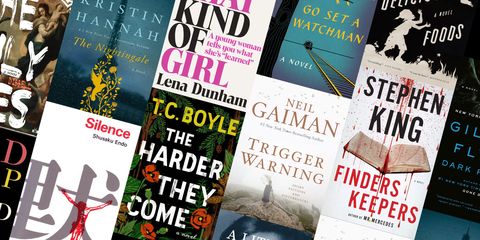 You know when your friends bring up a book and suddenly the whole table is like "I hated him too!" and "Wasn't that crazy?!" and "Oh I disagree—I think the ending was so trite" and you end up being the person just waiting for the conversation to be over? Read the books below and that'll never happen again. At least, not until there's a new batch of must-reads.

If you loved Gone Girl, consider this your new read. The book—which is set to be released as a movie starring Charlize Theron this year—is a thriller about a woman whose sisters and mother were murdered by her brother. She testifies against him, and 25 years later, she's confronted by a secret society obsessed with notorious crimes. Their mission? To free him. As she begins to unlock just what happened to her family, she could find herself face to face with a killer.

This isn't a new book, like at all (it was released in 1966), but it's going to be released as a movie in 2016—directed by Martin Scorcese, so you know it's going to be good. It's a historical fiction novel that examines the story of a Jesuit missionary sent to 17th century Japan, who then endures persecution following the defeat of the Shimabara Rebellion.

The Nightingale by Kristin Hannah

Set in France in the year 1940, Viann (a mom and wife of a solder) and her teenage sister have to deal as German Nazi soldiers invade their town and take over their house. As they struggle to survive, they're tested to see how far they're willing to go to fight for their country.

The Sellout by Paul Beatty

Tackling race issues through satire, The Sellout is one of those novels that is hilarious and biting and dazzling—as one NPR reviewer commented, "it's one of the smartest and most honest reflections on race and identity in America in a very long time."

Not That Kind of Girl by Lena Dunham

The Lena Dunham autobiography was released last year, but is still getting tons of buzz. Read the book so you can have intelligent debates and be in the know and all that jazz. Or just because Lena Dunham is great.

The master of horror is back with a sequel as he revisits the story of Bill Hodges—an embattled former detective who chases down a serial killer in Mr. Mercedes.

The highly anticipated release by Harper Lee, author of To Kill a Mockingbird, will release in July. The novel (Harper's second) was actually written before Mockingbird, but was thought to be lost until now. The story is set in the same world as her first released novel, and features Scout Finch as a young woman in the 1950s. This is a pre-order must.

The story follows an 11-year-old boy named Eddie, who is separated from his mother Darlene after she is lured and imprisoned on a remote farm by a company named "Delicious Foods." Darlene—a widow—struggles with an addiction to drugs and is forced to work in the fields in order to pay for her addiction. The story chronicles the circumstances of her imprisonment, as well as her need to reunite with her son.

This novel will be Morrison's first to be set in the current here and now, and weaves a tale about a young woman who calls herself "Bride" that takes a look at traumatic childhoods and how they can harm (or help) us as adults.

The Harder They Come by T.C. Boyle

The New York Times best-selling author Boyle explores the relationships between an aging former marine, his unstable son, and the son's much older lover in modern day California. It's a hard look at psyche and what parts of a relationship can pull you up and push you down.

The Only Ones by Carola Dibbell

A dystopian thriller, Carola Dibbell's novel introduces a post-pandemic world where a woman named Inez is immune to a spreading disease marks her as a living test subject. When another test subject backs out, Inez becomes responsible for the woman's child—a baby girl who is a scientific breakthrough.

A Little Life by Hanya Yanagihara

The story of four classmates who move to New York after college, the novel tackles friendship and romance and ambition and everything that is dark and magical in all of us. And EVERYONE is buzzing about it.

The newest offering from Neil Gaiman—known for works like American Gods and Sandman—is a collection of short stories and poems and even his awesome script for an episode of Doctor Who. So basically, required reading.

8 Must-Read Books for the Beach

6 Films Based on Classic Literature

Samantha Leal Senior Web Editor I'm Sam, the senior editor at MarieClaire.com.
This content is created and maintained by a third party, and imported onto this page to help users provide their email addresses. You may be able to find more information about this and similar content at piano.io
Advertisement - Continue Reading Below
More From Culture
New Drama Movies That Promise to Move You
The Sexiest New Movies of the Year
Advertisement - Continue Reading Below
A Look Back at Princess Anne's Life in Photos
Where Is the Cast of 'Gilmore Girls' Now?
'The Bachelor' Is Back!
Who Is "Queen" Victoria on 'The Bachelor'?
Matt James' 'Bachelor' Cast: Everything We Know
Get to Know Serena Pitt From 'The Bachelor'
The Best Lesbian Movies Streaming on Netflix
Listen to the Best New Love Songs of 2021 (So Far)