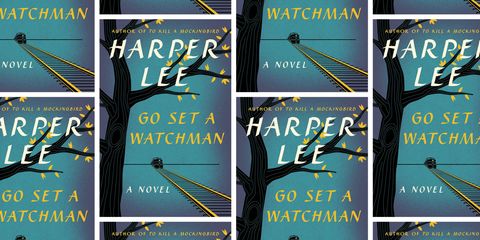 Update, 7/13: Deep in the story of how she discovered the manuscript for Go Set a Watchman, Harper Lee's lawyer Tonja Carter reveals that when she recently went back into the author's safety-deposit box to pan for more literary gold, she instead found, like, 50 grams of astatine: a "significant number of pages" of an entirely new work.

"Was it an earlier draft of Watchman, or of Mockingbird, or even, as early correspondence indicates it might be, a third book bridging the two?" Carter writes in the op-ed. [Editor's note: AHHHHHHHH.] She says a group of experts are investigating the pages under Lee's "direction."

Update, 7/10: All you need to know is that Scout is in her 20s, sexually liberated, on her way home to Alabama, contemplating a marriage proposal, and that theWall Street Journal has the first chapter of Go Set a Watchman in advance of its Tuesday release.

Hurry now, and don't let anything stop you.

Update, 4/23: Are you more jealous that Reese Witherspoon got to read Go Tell a Watchman before you or more excited that she's going to record the audiobook? Um...both?

"As a Southerner, it is an honor and privilege to give voice to the Southern characters who inspired my childhood love of reading, Scout and Atticus Finch," Witherspoon said in a statement to USA Today. "I am eager for readers to be transported to a pivotal time in American history in the manner that only Harper Lee's gorgeous prose can deliver."

Will she play up her accent? Does she even need to given that, in the story, Scout moved to New York? We'll have to wait until July 14, when the unabridged audio version and the book will be released simultaneously.

Update, 3/25: Not a false alarm this time—the real cover of Harper Lee's Go Set a Watchman has been released.

Ain't it a beaut? HarperCollins president Michael Morrison tells People the art was meant to complement TKAM and "draw on the style of the decade the book was written." By the way, they've ordered two million copies for the first printing, which is still no assurance you won't have to set up camp outside Barnes & Noble far in advance of July 14.

Update, 2/9: Recommence flailing. The cover for Harper Lee's Go Set a Watchman has (potentially) arrived, and it looks exactly how you thought it would: clean, minimalist, and like it would totally belong on an 11th-grade English required-reading list.

According to Time, the offical cover has yet to emerge on the website of HarperCollins Publishers, the North American publisher of Lee's novel, but it has appeared on the British publisher's site and Amazon.com.

Doesn't it look nice as a companion to the first book?

Original post, 2/3: It's so hard to type right now because we. are. flailing. Pulitzer Prize-winning To Kill a Mockingbird author Harper Lee will publish her first new work in more than 50 years, reports the Associated Press.

Completed in the 1950s and set aside until last fall, Go Set a Watchman will act as a sequel to everybody's favorite junior high English assignment. Adult Scout returns to Maycomb, where "she is forced to grapple with issues both personal and political as she tries to understand her father's attitude toward society and her own feelings about the place where she was born and spent her childhood," said publisher Harper in a statement today.

Two things we must emphasize here: 1) Scout is a New Yorker. 2) ATTICUS FINCH.

Also, considering that To Kill a Mockingbird was Lee's one-hit-wonder moment (though a huge hit at that), we're sure this must be majorly satisfying for her. The writer has been under scrutiny her entire life—as many debut-novel breakouts are—for not being able to produce another work as good as the first. Or another work at all.

According to the publisher, the new book will be released as the 88-year-old Lee first wrote it, with an initial printing of two million copies.