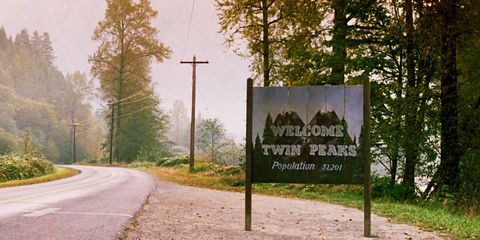 Planning a romantic night in with your Netflix? Obviously the answer to that question is yes, so why don't you go ahead and slip into your most comfortable '90s throwback sweater and prepare for a Twin Peaks marathon?

The cult-classic murder mystery turns 25 today, and if you haven't seen it already, know this: You're missing out on a weird, wonderful pop culture phenomenon. Here's why:

1. Twin Peaks inspired some of your favorite shows

On the surface, Twin Peaks is a small-town mystery set in the Pacific Northwest, but as Agent Dale Cooper tries to find out who killed Laura Palmer, the show quickly becomes defined by its idiosyncratic cast of characters (shout out to The Log Lady), its atmospheric cinematography, and its conflation of the prosaic and supernatural. These elements—along with eerie dream sequences and slow-paced tension building—inspired shows like The Sopranos, Buffy the Vampire Slayer, and The X-Files. Twin Peaks' influences can even be charted in Mad Men and teen hit Pretty Little Liars. So basically, everything.

There have been entire blogs devoted to Twin Peaks' flawless fashion, and the show is a feat of sartorial prowess. You're pretty much guaranteed to wear a uniform of tartan midi skirts, pumps, and angora sweaters by the time you've finished bingeing, so start saving for a thrift-shop excursion now. Those penny loafers aren't going to buy themselves.

3. Gotta prepare for that reboot

Showtime is rebooting Twin Peaks for 2016, and the original cast—including Kyle McLaughlin as Dale Cooper and Sheryl Lee as Laura Palmer—are slated to return. Rumor has it that more familiar faces will be joining the show's new incarnation...the only downside is that David Lynch recently dropped out as director of the reboot because Showtime wouldn't fork over enough cash to create his vision.

4. It's the ultimate small-town mystery

The biggest appeal of Twin Peaks—and something that makes it universally beloved—is the fact that it's straight-up cozy. Despite the whole psycho killer thing, viewers quickly feel like they want to move to Twin Peaks thanks to the show's quirky characters and subversive charm. You'll want to wear a sweater and drink hot chocolate while watching.

5. Much like a damn fine cup of coffee, you won't be able to stop

Twin Peaks' notorious slow build makes it impossible to stop watching, so you might want to cancel those happy hour plans and carve out about 10 hours from your day.

7 Signs You're In A Serious Relationship With Netflix

Everything That's New on Netflix in April