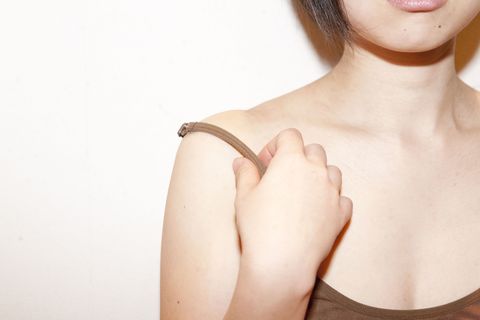 Despite 2014 being one extremely kick-ass year for feminism (see: Emma Watson's UN speech, Beyoncé's feminist declaration at the Grammys, Malala's Nobel Peace Prize win, and Laverne Cox's Time cover, to name just a few), there was one space where women were arguably treated with more hatred and hostility than ever before: the internet.

Last year brought the birth of #Gamergate, the online movement supposedly dedicated to ethics in gaming journalism but in actuality aiming to force women out of gaming—via murder and rape threats and other forms of online harassment and abuse. Then there was the Fappening, when over 100 celebrities' nude photos were stolen and leaked on 4chan. In her appropriately titled essay "Why Women Aren't Welcome On the Internet," Amanda Hess's account of the vitriolic threats she received in response to her work as a writer served as a scary and all too real example of the abuse so many women face online.

Suffice it to say, 2015 has not seen much improvement. There are certain men who seem to want the entire internet to be free of women (at least, when we're clothed). And it's becoming increasingly clear that victim-blaming strategies like "don't read the comments" aren't going to bring about the necessary change.

Cue Tina Brown's Women in the World Summit, which featured a recent discussion called "Stop the Trolls," dedicated to finally putting an end to cyberbullying and online harassment. The panelists made it clear: It's time for web companies and law enforcement both to do more—a lot more—in this realm.

"I was attacked by a cyber mob," Anita Sarkeesian told moderator Katie Couric of an experience she detailed for Marie Claire. "There's this sense of entitlement that some male gamers have for gaming to be a male-dominated space."

And it's not just gamers. Take actress Ashley Judd, who has been dealing with cyber harassment for years, but was pushed to a breaking point after receiving a barrage of online abuse when she tweeted a controversial thought about March Madness. She called the police to report the harassment. "I think it's the first call of its type that the Williams County Sheriff's Department ever received," she joked. "They were very responsive and in fact volunteered to come to my home."

But as Couric pointed out, that type of response is highly unusual. "The obstacle is having the victim come forward," seconded California State Attorney Kamala D. Harris, whose investigation with the DOJ sent the operator of a San Diego cyber-exploitation website to jail for eighteen years.

Law enforcement also needs to step up. "When I was elected District Attorney of San Francisco in 2003, two thirds of my lawyers did not have email," she said. "We have [since] created an e-crime unit of the California Department of Justice to focus on these issues. Training law enforcement has to be a priority for the country, and has to be a priority for local law enforcement. We can't wait until people figure it out. This is where technology companies come into play."

What this means is that social media users have to pressure the websites they use to be better at responding to cyber abuse. "There has to be a price to these companies," added New York Times Magazine writer Emily Bazelon. "The other thing is… [companies like Twitter] have to figure out a way to tie the reprimands they are giving to people that they don't necessarily shut down their account and start over but actually take some kind of interim punishment: delete tweets, get kicked off for some amount of time, these kind of steps. People are attached to their social media accounts, and they don't want to seem like villains in the eyes of these companies."

The good news? There's still reason for optimism. "Conversations like the one we are talking about here make a huge difference," said Bazelon. "They're about changing what's now an acceptable form of misogny and challenging that, calling it what it is, and then expecting people to hold it to different standards."

The Dangers of Female Bullies at the Workplace