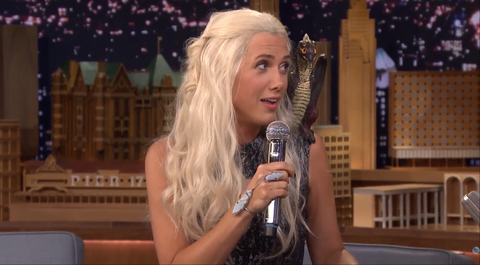 She might not have any management skills, but Khaleesi sure can make up song lyrics on the spot as well as the whip-smart Kristen Wiig. Ahem.

The Mother of Dragons and her main fire-breathing protégé Karlie Karleesia appeared on Jimmy Fallon last night and divulged some intimate details about her personal life, such as her favorite vacation spot (the west elm of the shore, whatever that means), her secret talent (playing the mandolin), her other secret talent (performing spells on people), and her other other secret talent (stand-up comedy). We also learn her impressive cleavage is actually just some clever slight of hand and that she "met Kristen Wiig" on the flight over—commercial, because Karlie Karleesia didn't have clearance.

More People Are Pirating 'Game of Thrones' Than Ever Before

Chelsea Peng I'm Chelsea Peng, the assistant editor at MarieClaire.com.
Advertisement - Continue Reading Below
More From Culture
Read 'Anna K' Even If You Didn't Read the Original
19 Most Underrated Films of All Time
Advertisement - Continue Reading Below
The Music Podcasts We Keep Pressing Play On
Why You Keep Seeing "Until Tomorrow" on Instagram
The 19 Best Murder Mystery Movies
How to Join Marie Claire's Online Book Club
'In Five Years' Is MC's April Book Club Pick
'Little Fires Everywhere' Is a '90s Time Capsule
How Murtagh Dies in the Outlander Books
What Happened to John Finlay From 'Tiger King'?