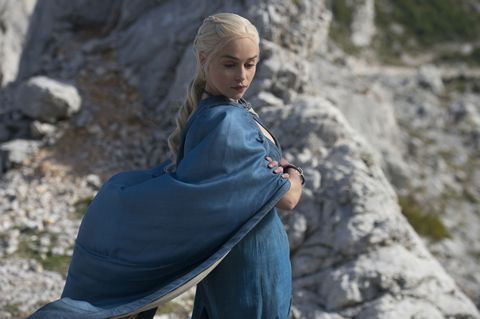 Daenerys Targaryen is a lot of things: the First of Her Name, Queen of Meereen, Breaker of Chains, Queen of the Andals and the First Men, Mother of Dragons, etc. etc. Also: my least favorite character on Game of Thrones.

If she worked in your office, you would hate her. She gets everyone to do the work for her, for better or worse, and then takes all the credit. That's called Being Bad At Your Job. And when your job is governing the people you've set free, the people who don't know how to live in this brand-new society you've created for them, the people you're supposed to be guiding, that shit kind of doesn't fly.

It wasn't always this way. Dany used to take control—like the way she took control of her relationship with Khal Drogo (RIP, emoji prayer hands), or the control she took back from her way-creepy older brother Viserys, or the that glorious scene in Astapor where she surprise-slayed the Unsullied slave-master with her perfect Valyrian and had her baby dragons burn down the house. Oh yeah, and she did birth dragons. Which is cool, obviously.

But then she got comfortable. With an army, a legion of followers who think she's "Mhysa," and a council that are all fighting over being her favorite, she's relaxed into letting other people "help" her rule (you're the Queen! YOU DO THE RULING!) and basically doing not a whole lot other than lock two out of her three dragons up in a dungeon, while the other is who-knows-where breathing fire on everything. (P.S. If her family once ruled Westeros with dragons, then there's got to be a way to train them, no? Figure it out, Dany. But also, I haven't read the books, so if this is explained in them I really don't want to know.)

If her family once ruled Westeros with dragons, then there's got to be a way to train them, no?

Let's look at last week's episode: man-butt hero/Dany's boo thang Daario Naharis and a group of Unsullied find a Son of the Harpy—one of the Mardi Gras mask-wearing rebels who want to dethrone Dany and reinstall slavery in Meereen, and also the dudes who murdered an Unsullied in the season premiere—and what does Dany do? She lets Ser Barristan Selmy guilt trip her into agreeing to give the guy a fair trial instead of executing him. To teach the people of Meereen "the right way." The same reason she won't re-open Yunkai's fighting pits. Spoiler alert: That's not how this works. She doesn't take any time to learn about the history and customs and best dive bars of any land she conquers. To figure out a way to incorporate their old cultures into their new realities. She assumes everyone will live happily ever after.

But they don't. Like when guy-with-the-necklace murders the Harpy dude. He does it to send a message, which he also writes on a wall in blood: KILL THE MASTERS. A reminder that the people of Meereen refuse to be enslaved ever again.

It's actually, like, no big deal. I mean, yeah, that was wrong. And he broke the law. He disobeyed the Queen, etc. etc. But it's nothing to, drum roll, lose your head over. (NAILED IT: Guy-with-the-necklace gets his head chopped off at Dany's command.)

Okay, so, punish him...but why kill him?! Think about it, Dany: What sort of message does that send? You didn't kill the slave master-backed Harpy when he killed an Unsullied. But you'll kill the good guy who killed the bad guy? Just makes it look like you're siding with the wrong slave-loving team. Oh, and then you go and do it in public so that everyone can see it while they chant "mercy."

It surprises exactly one person (Dany) when the crowd hisses at her in response and tries to attack. Even her dragon Drogon (LOL, least creative name for a dragon ever) throws shade at her when he flies overhead in the final scene.

Meanwhile, Cersei Lannister plays the game like a wine-soaked boss, only going after what she wants, not what she thinks is right. Margaery Tyrell doesn't let anything (i.e. a hateful mother-in-law) stand in her way to getting what's hers (i.e. that mother-in-law's crown). Sansa Stark has been slyly saving her own ass from the very beginning even when you thought she was just being whiney. And Arya Stark will cut you if you look at her funny.

The female characters are the best part of Game of Thrones—their strength, their wit, their massive amount of power in a world that leaves them powerless—so come on, Dany. Get your head in the game.