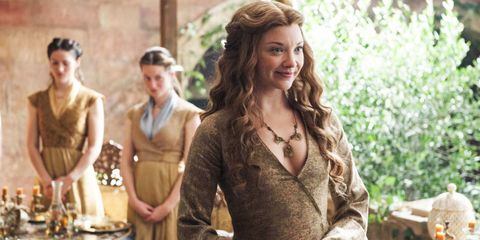 1. Find yourself—then lose all of your personal belongings and sacrifice your identity to become "no one."

What Happened: While hanging out in the House of Black and White, Arya Stark learned that to be a "faceless man," she must lose her identity. This also meant getting rid of her cute little sword, Needle. :(

The Lesson: "Faceless men" are cool (hi, Jaqen H'ghar!) and you should totally try to be one—all you gotta do is shed every layer of your personality until you are reduced to nothingness! After that, you get to sweep floors and wash dead people. Eventually, you'll be able to change your face into other people's faces—presumably.

2. Stop texting—send all pressing messages with a raven.

What Happened: Cersei Lannister told her personal Victor Frankenstein, Qyburn, to send a raven out to Littlefinger with the word 'immediately' in caps lock and bold.

The Lesson: They say that sending a card shows you care; when you send a raven, it shows you f*cking mean business.

3. If you don't like your mother-in-law, kill her! JK—just plot to have her exiled without telling your teen-hubby.

What Happened: Following some post-coital cuddling, Margaery Tyrell emasculated her teenage king Tommen Baratheon by subtly calling him a mama's boy. The next day, Tommen asked his mom Cersei if she wants to go back home to Casterly Rock.

The Lesson: No need to hang out with your mother-in-law if y'all are beefing—just get her banished to some far off region. Follow Margaery's lead, and discreetly suggest that she's gotta go. It's not like she'll totally see through your plan or anything.

4. Distract yourself from how annoying your manservant is by teaching him how to fight.

What Happened: After roaming Westeros with her squire Podrick Payne and getting rejected by every living Stark, Brienne of Tarth decided it was time to teach Pod some fighting skills.

The Lesson: If you've got a doting man friend, train him to become a warrior. In Brienne's case, Pod is great for starting fires, taking off her armor, and revealing heartbreaking, embarrassing stories that explain her loyalty to Renly Baratheon, but he'd be even more useful as a personal attack dog.

5. Hitting people can be fun.

What Happened: Jaqen H'ghar's faceless woman-in-training decided to play the "Game of Faces" with Arya. The rules of the game are simple: 1) Person A robotically asks person B, "Who are you?" 2) Person B answers, and then gets hit by Person A.

The Lesson: The 'Game of Faces'—fun for the whole family!

6. Marry your arch nemesis's son in order to destroy his family.

What Happened: Littlefinger returned Sansa Stark to the North, where she would be married to…Ramsay Bolton (ugghhhh). Even though her fiancé-to-be dad, Roose, murdered her mother/brother/sister-in-law/unborn nephew/uncles/literally everyone else, Sansa agreed to go. According to her creepy uncle, it will be a great opportunity to avenge the House of Stark.

The Lesson: Marriage is a great way to embed yourself in the home of your enemies and slowly tear them apart from the inside. Just keep smiling and don't get caught.