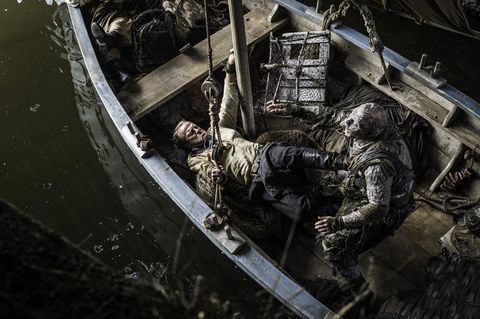 1. The secret to a happy relationship: Threaten to feed a man to your dragons, then marry him.

What Happened: Daenerys Targaryen was pissed that the Sons of the Harpy killed Ser Barristan Selmy the Badass, so she locked up the heads of the most powerful families of Meereen, and then fed some guy to her dragons (fiery special effects, check). Also, to show the city she cares about tradition, she decided to marry her advisor/prisoner Hizdahr zo Loraq.

The Lesson: It may be against tradition, but sometimes it's perfectly fine to propose to the guy—especially after you've threatened to roast him via your fire-breathing beasts. It lets him know who's boss.

2. Bite your lover's lip so hard it bleeds = guaranteed turn-on.

What Happened: Crazy-lady Myranda learned that once Ramsay Bolton marries Sansa Stark, she'll be demoted from main piece to sidepiece status. To keep Ramsey from getting "bored" (because when that happens, he, uh, peels people's skin off), she kept things interesting in the bedroom by gnawing at his lip. Ramsey was super into it.

The Lesson: Biting can be sexy. Pain is pleasure. Don't get flayed.

3. Watch over those in danger. In fact, stalk them, set up camp outside their home, and send them messages.

What Happened: After trailing Sansa to the North, Brienne of Tarth and Pod holed up in a cozy AirBnB nearby. After making friends with the innkeeper, Bri was able to send a message to Sansa, through the Bolton's cleaning lady, telling her to light a candle in the tower if she's in trouble.

The Lesson: If you've sworn to protect someone, it's very normal to follow that person across the world, eagerly awaiting the opportunity to cut down any threatening forces with your giant sword. It's not creepy; it's thoughtful.

What Happened: Ramsay's jealous girlfriend told Sansa that there was a "surprise" waiting for her in the depths of the Boltons' kennel of ferocious beasts. With zero reservations, Sansa marched onward into the dog den and found...Reek.

The Lesson: Have complete, unwavering faith in strangers, especially if they suggest venturing into a dark lair filled with savage canines. Don't question their motives—just go along with it. Nothing bad will happen.

5. It's totally fine to bother people while they're trying to figure out how to save the world.

What Happened: While Samwell Tarly scoured the Castle Black library, tirelessly searching for a "how to" on defeating an army of sentient zombies, Gilly kept asking him questions about what city has the biggest library.

The Lesson: If you really want to know something, wait until someone settles down to read a book about saving the world, and then ask away. That person definitely wants to talk to you.

6. Go for the guy without the "pillar and the stones."

What Happened: Missandei tended to a wounded Grey Worm, who declared his love for her after a near-death experience. Touched, Daenerys' trusted advisor leaned in, and made the first move.

The Lesson: They say men think with their dicks—but what if he doesn't have one? That's when you know he's a keeper. Missandei is 100% sure that Grey Worm—who was "cut" as a child to become an Unsullied—isn't just trying to get laid, so she welcomes his gushy confession. Follow her lead, and give eunuchs a chance.

HBO
This content is created and maintained by a third party, and imported onto this page to help users provide their email addresses. You may be able to find more information about this and similar content at piano.io
Advertisement - Continue Reading Below
More From Culture
When You Can Expect New Episodes of 'The Circle'
'Ginny & Georgia' Season 2: Everything We Know
Advertisement - Continue Reading Below
Get to Know Courtney From Season 2 of 'The Circle'
'The Circle' USA Is Actually Filmed In the U.K.
The 25 Hottest Movies on Hulu Right Now
There's a UK Version of 'The Circle'
Bethenny Frankel Is Minding Her Own Business
Historical Films to Stream If You Loved 'Hamilton'
The Top-Grossing Book-to-Movie Adaptations
A Look Back at Princess Anne's Life in Photos