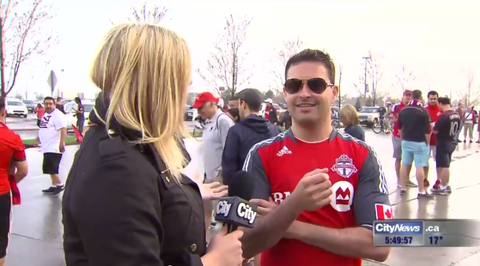 Update, 5/14: Joke's on these dudes. After making an offensive remark to a female reporter on live TV, at least two of the men are being punished. And one of them has already lost his job.

That's right. The man at the end who says the joke is "f*cking hilarious" was later identified as Shawn Simoes. Simoes was an assistant network management engineer with Hydro One, making $106,510.50 a year. We say was, because, he's not anymore. He's been fired for violating company conduct.

In a statement issued and reported by EliteDaily.com, the company explains: "Respect for all people is ingrained in the code and our values. We are committed to a work environment where discrimination or harassment of any type is met with zero tolerance."

As for the dude in the glasses? He's also being punished. He works for Cognex, and the communications director had this to say about the incident: "While the individual was attending the event on his own time and was not at a Cognex activity, the views expressed are totally inconsistent with Cognex's values, and we find such comments reprehensible."

Oh, and did we mention everyone in that group is being identified and quickly banned from the stadium for at least a year? Yep.

Original post, 5/12: Hey, remember that time everyone thought it was just SO funny to ruin live broadcasts run by women by yelling "f*ck her in the pussy"? Maybe you don't, considering it happened EONS ago. Well, 1) it's apparently still funny to some people, like the douchebag version of a dad joke 2) it's still happening out there...in the world. Like, now.

But a reporter fought back against her harassers on live TV, and it was both infuriating and soul-satisfying and ridiculous, all rolled into one. Shauna Hunt, a news reporter for Canada City News, was covering the Toronto FC game when a heckler interrupted her broadcast to say the gross thing that we already mentioned once so we won't again. Then, she asked him and his group of friends (who laugh, until they realize they're being filmed and fled the scene) about the comment. Not only did she keep her cool (you are a better person than most, Hunt), but she made these men look like jackasses on live TV. (Granted, it didn't take much.) It is, in sum, the best thing.

The most important takeaway, however, is that at the end a man continues to defend the comment, saying that it is hilarious. When asked what his mother would think, he said she would "die laughing, eventually." We think he might have meant to take out the "laughing" part. (And quick, someone get that man a real sense of humor.)

Watch it go down below:

This content is imported from YouTube. You may be able to find the same content in another format, or you may be able to find more information, at their web site.
This content is created and maintained by a third party, and imported onto this page to help users provide their email addresses. You may be able to find more information about this and similar content at piano.io
Advertisement - Continue Reading Below
More From Culture
'Shadow and Bone' Cast: Get to Know Who's Who
The Unbearable Whiteness of Ballet
Advertisement - Continue Reading Below
'Ginny & Georgia' Season 2: Everything We Know
The Ultimate Ranking of 'GOT' Sex Scenes
The Cast of 'The Nevers' Plays Trivia
The Most Exciting New TV Shows of 2021
Get to Know Delessa From 'The Circle'
36 Movies With Super-Romantic Sex Scenes
Anne Hathaway & Elizabeth Nyamayaro on Compassion
When You Can Expect New Episodes of 'The Circle'