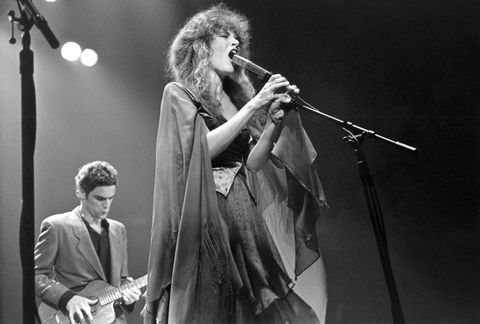 Stevie Nicks, who is still touring at 66-years-old, has forged a path for women in rock 'n' roll—and now she's calling for bands everywhere to mix it up on the gender spectrum like Fleetwood Mac.

"I think every band should have a girl in it, because it's always going to make for cooler stuff going on than if it's just a bunch of guys," she explains in a new interview with Mojo magazine.

And whether the dynamic becomes impassioned or stays strictly platonic, it "casts a romantic spell," she says. (And if you need evidence, let this throwback, official performance video for "Dreams" give you all the feels.)

And Nicks isn't just *saying* something—she's personally helping top female artists by promoting them and what they do. Back in October, during a jam session with the Haim sisters, she made a remark about how they're the next generation of lady rockers.

"You're gonna be that rock 'n' roll woman that's going to make people happy and take them out of their miserable lives for two hours...and they're going to want your music," she told them. "And then, girls...at 66 years old, you can be starting a year and a half tour that sold out its US dates—in the first week."

But that's not all. Just last week, she hung out with Adele before a show and announced to the crowd that the soulful crooner will be just like her when she's older. "I told [Adele], 'You're going to be me in 40 years,'" she said. "You're going to still be up onstage doing what you're doing because of your song writing."

So...tonight was THE best night of my life. I love you Stevie Nicks!! The queen of melodies! Thanks for everything x pic.twitter.com/OKukHIpiV4

This content is created and maintained by a third party, and imported onto this page to help users provide their email addresses. You may be able to find more information about this and similar content at piano.io
Advertisement - Continue Reading Below
More From Culture
The 25 Most Underrated Films Ever Made
Were the Paintings in 'This Is a Robbery' Found?
Advertisement - Continue Reading Below
'Bridgerton' Season 2: Everything We Know
New True Crime Books You'll Obsess Over
The 'Who Killed Sara?' Cast: Your Complete Guide
The 'Paradise City' Cast Plays Trivia
Sad Movies for When You Need a Good Cry
What Happens When Prince Philip Dies?
Photos of Prince Philip with His Grandchildren
The Queen and Prince Philip's Marriage Timeline