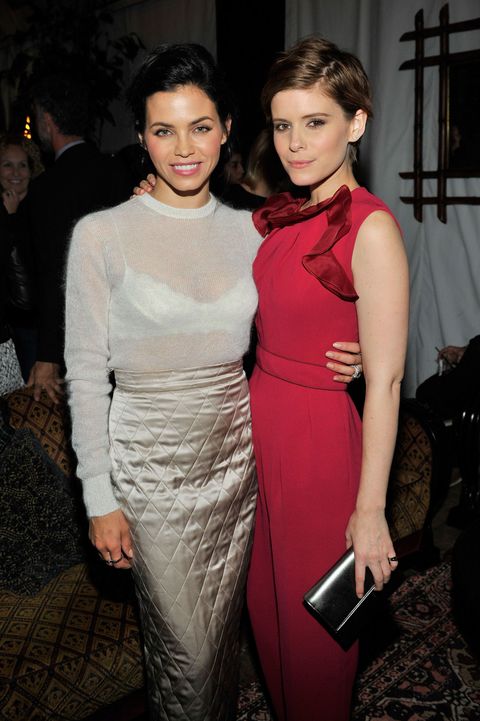 As Beyoncé likes to remind us, women (or girls, more specifically) run the world. Yet when it comes to the film industry, women continue to be marginalized: Only 12 percent of protagonists were female in 2014, and women accounted for just 30 percent of speaking characters. Epically depressing, we know—but the good news is that Women in Film and Max Mara are dedicated to making sure women are equally represented.

This week, Women in Film celebrated the 2015 Crystal + Lucy Awards, where Max Mara honored Kate Mara (so many Maras!) with the Face of the Future Award. "We think it's important to constantly support and encourage women to develop their talent, so we created this Max Mara Face of the Future award 10 years ago," Max Mara's brand ambassador, Nicola Maramotti, says. "We're giving it to a talented actress who's experiencing a turning point in her professional career."

We spoke with talent agent Iris Grossman, President Emerita of Women in Film, about this mutual passion for supporting women, ageism in Hollywood, and why she's so not on board with Amy Pascal's advice for underpaid female stars.

Marie Claire: Amy Schumer recently
did a hilarious skit with Julia Louis-Dreyfus and Tina Fey
about the shelf-life of female actresses in Hollywood. The industry certainly promotes the belief that men are sexier for longer than women (ahem, George Clooney). Why aren't there more romantic leads written for older women? The audience is undoubtedly there.

Iris Grossman: "Let's take what happened to Maggie Gyllenhaal. How is Maggie Gyllenhaal at 37 too old to be the wife or lover of a man who's 50? That's insane. I think it's a question of ageism for women. I thought the Amy Schumer skit was priceless. It was so spot on. I think years ago when Meryl Streep was honored with the Women in Film Crystal + Lucy Award, she talked about the fact that she used to be young enough to play Dustin Hoffman's wife in Kramer vs. Kramer. And all of a sudden, she's too old to play his wife. If you look at actresses like Jessica Lange and Meryl Streep and Sigourney Weaver and Glenn Close, now they play witches. And then they play Jessica Tandy in Driving Miss Daisy. That's a problem. Then, the industry is surprised when these movies with older women do so well. The baby boomer generation, we're the ones with all the disposable income, we're the ones that want to see movies that relate to us. There's a huge demand for it, and especially for women."

"Maybe there's a new place for women's movies...because they're not making it in the theaters."

MC: Then what's the problem, what's the disconnect? The audience is there, it's a good money-making opportunity. Why aren't older women being cast as romantic leads?

IG: "Well, look at I'll See You in My Dreams, the movie that just came out with Bryce Danner and Sam Elliott. That's a small, tiny independent movie that's doing so well. Why? Because—I'm going to get in trouble for saying all this—I think the movie studios are doing one to 12 pictures that get a lot of people into the movies. The special effects have to be out of this world. The stories have to be bigger than life. Because the Netflixes, the Amazons, and the Hulus are making small movies that get a lot of eyeballs. For instance, if you take Grace and Frankie—with that cast it probably wouldn't have sold to a network because they would go 'that's old.' It's fantastic and people are watching it. I think that the movie studios are doing these younger, male-oriented action packed blockbusters because that's what people want to do when they go out. When they want to stay home, they're watching Still Alice on Netflix. The question becomes, maybe there's a new place for women's movies? Because they're not making it in the theaters. Of course, this isn't true for younger women. Pitch Perfect, The Hunger Games, and Divergent are all female-led movies killing it at the box office. The young female audience is there and going to movies."

MC: How can more women fit into that big blockbuster genre? Look at the new Mad Max movie—it put a feminist spin on a male dominated genre and the critical response has been excellent. Why aren't more action movies making this bold move?

IG: "When you're having is studios listening to ideas and pitches, they have to be a little more brave. When Scarlett Johansson did Avengers, she's wearing a black rubber cat suit doing these incredible stunts—people want to watch that. What if she had been Iron Girl and she was the head of a corporation? I guess it's just that men can't get their heads wrapped around it, and studio executives aren't brave enough."

MC: Yet when they did take a risk in the new Ghostbusters movie, the internet goes crazy with backlash. Are execs influenced by this backlash?

IG: "I think the jury is out. They have Melissa McCarthy, who has opened huge in Spy. That's really interesting, too: here is a woman who is not a typical movie star, right? But she's a comic genius and people want to see her because they can relate to her. Now you have Ghostbusters with this all female cast. And guess what? When that movie is a hit—and it will be—then somebody will say 'aha!' It all changes at the box office. At the end of the day, you know what makes change? When you put the tuckuses in the seat and the money is being spent. That's what changes it all."

"When Scarlett Johansson did Avengers, she's wearing a black rubber cat suit doing these incredible stunts...what if she had been Iron Girl and she was the head of a corporation?"

MC: 74% of all female characters in 2014 were white. Flash forward one year, and Emma Stone's casting as a half-Chinese/quarter Hawaiian character in Aloha is creating controversy because an Asian actress wasn't chosen for the part. How can the industry make more of an effort to represent women of color?

IG: "If you look on television you will notice that there are more people of color in the television space than ever before, which is a good thing. It's unique to the medium. I think it's also what the networks have demanded. They are going into people's homes and the world is diverse, and they are addressing it. I think it's terrible that 74% of roles are white women in movies. Yet, I think casting directors are the most encouraging of diversity that you will find. I know this because I am dealing with it every day. Why people don't get hired in those rooms doesn't make sense to me."

MC: The Sony hacks revealed that Jennifer Lawrence and Amy Adams made significantly less than their male co-stars in American Hustle. Why is it that in 2015, women still aren't making as much as their male peers?

IG: "I wish I knew the answer to this question because as a representative, you think to yourself, 'I don't get it, if she's starring in this movie and she's doing all this work, why is she not getting paid the same?' It's such a male-dominated world. Amy Pascal said in an interview, 'people want to work for less money, I'll pay them less money. I don't call them up and say, Can I give you some more? Because that's not what you do when you run a business.' I thought it was unfortunate because even though she's being a smart business woman, it harkens back to 'then why don't you do the same thing with men?' If you're trying to save money and get the best deal possible, why are you giving a man a raise and not a woman a raise?"

"None of it is fair until the people who are paying step up and take responsibility for paying equal amounts of money. I think a lot of things women have struggled with is, we always want to be the good girl. We always want to do the right thing. In the real world women have always done what's more appropriate because we're told from being little girls 'you should be happy with what you've got.' Boys have always been told go for the brass ring. It's a complete double standard, but it's not just in Hollywood. It starts in the world."