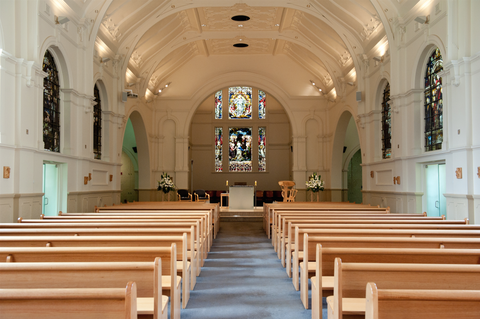 I grew up the way I imagine lots of midwestern Catholic kids grow up. My family dutifully attended church on major holidays like Christmas and Easter, or on the rare Sunday when my mother succeeded in wrangling us into appropriate outfits and into a pew.

My parents weren't Bible thumpers or anything, but they saw raising their children Catholic as a key part of a healthy upbringing. Like making sure we drank our milk and did our homework.

During college and my hazy early 20s, my interest in going to church was about as low as the waistband on my jeans. As I grew older, though, my partying fizzled out and my what's-it-all-for existential anxiety flared up. I started popping into church from time to time. The quiet hour alone proved to be calming, reflective, even nostalgic.

I didn't start advertising my religion with a giant cross necklace or a Jesus-fish bumper sticker, but I wasn't hiding it either—or at least, I wasn't until I noticed the consistently stunned reactions from my friends.

"You...go to church?" they'd say incredulously over brunch, like I was suddenly Amish. I started to feel self-conscious. What was the big deal?

The faithful still make up a majority of American citizens—over 75% of people in this country affiliate with an organized religion, at last count. And they have good reason: "It's about participating in a ritual that can be counted on to provide insight, a bit of wisdom, and maybe even a kernel of truth about the world we live in," Brittany, 29, told me recently of why she regularly attends church.

But while society demands that, say, our presidential candidates maintain a religious affiliation, elsewhere such fealty is increasingly stigmatized. Consider pop-culture portrayal—the silly naiveté in Book of Mormon, the brainwashed militancy of Jesus Camp, the gawk-y voyeurism of TLC's television lineup, the loopy devotion to a piece of toast on the new season of Orange Is the New Black.

Maybe it's because of the political extremism that certain sects of Christianity seem to have taken on in recent years. When you tell people you're a Christian now, many of them conjure Fox News, not morning mass.

Or you just don't tell them at all.

The shift away from religion isn't only about how it's depicted in pop culture. Women are statistically more religious than men, but young women have more reason now to butt heads with their institutions than ever before. "I understand that religion is what many people need," says Rachel, 28, "but I think it gets more complicated when you look at the political effects." Rachel was raised Catholic, but feels that her support of issues like abortion and same-sex marriage don't jibe with the religion she grew up in.

A recent Pew Research Center study showed a 7.8% decline in the Americans who identify as religious since 2007, which corresponds with a rise in people who register as "religious nones," or atheist, agnostic, or skeptical. Nearly one in five women classify themselves as religiously unaffiliated in 2015.

Maureen, 25, is one of them. "There's absolutely a stigma to being openly religious," she says. "I'd never go out with a guy who lists himself as Christian on his Tinder profile."

On the other hand, Pope Francis has proven himself to be a shockingly modern leader of 1.2 billion Catholic followers. In the two years since his papacy began, he's spoken out on such topics as climate change, gay tolerance, and the celibacy of priests. Maybe he's slowly but surely changing perceptions to make Christianity feel more current, more in-touch, and therefore more widely accepted.

"I'd never go out with a guy who lists himself as Christian on his Tinder profile."

It sounds like a lot of black and white—religious or atheist, antiquated or modern. But of course, in the year 2015, there's plenty of room for gray. "I consider myself 'spiritual,' and have found my own ways of staying centered," Rachel says. "I try to meditate. I love hiking and staying active." My friends look to meditation or good old-fashioned therapy as their go-to methods for keeping their moral fiber in check.

Going to church doesn't necessarily make you a good person, and being a good person doesn't mean you must go to church. It works for me, though. And while I'm not going to walk around wearing WWJD bracelets anytime soon, I am happy with my path. Who knows—maybe I'll bring a friend.

This content is created and maintained by a third party, and imported onto this page to help users provide their email addresses. You may be able to find more information about this and similar content at piano.io
Advertisement - Continue Reading Below
More From Culture
The Sexiest New Movies of the Year
A Look Back at Princess Anne's Life in Photos
Advertisement - Continue Reading Below
Where Is the Cast of 'Gilmore Girls' Now?
'The Bachelor' Is Back!
Who Is "Queen" Victoria on 'The Bachelor'?
Matt James' 'Bachelor' Cast: Everything We Know
Get to Know Serena Pitt From 'The Bachelor'
The Best Lesbian Movies Streaming on Netflix
Listen to the Best New Love Songs of 2021 (So Far)
Who Is Christine Chiu on Netflix's 'Bling Empire'?