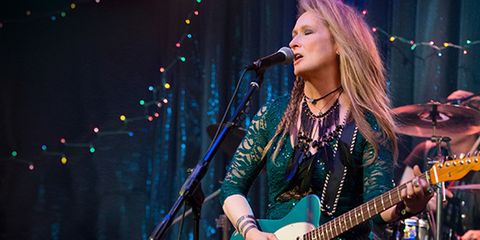 Ricki and the Flash (in theaters August 7) is the ultimate girl-power flick: It stars Meryl Streep flawlessly rocking out onstage (and getting yelled at by her real-life daughter actress Mamie Gummer), it'll make you actually, you know, want to call your mom, and it's got a kickass feminist message thanks to its kickass feminist screenwriter Diablo Cody.

We called up Cody to talk double standards, Barbies, and pink hair.

Marie Claire: First things first: What would your band name be? "Diablo and the..."

Diablo Cody: Diablo and the Regrets. The invisible band that follows me everywhere.

MC: So where did this story come from?

DC: I wanted to write a story about the decision that women are faced with—whether or not to follow a dream after you have children. It seemed like something that I, personally, was grappling with, and something that women around me were grappling with and it just was something that I wanted to address. Also, my mother-in-law is the lead singer of a cover band in the Jersey Shore and has been doing it for decades. She's such a rock star. And it's very inspiring. So I wanted to write a movie about someone who wasn't necessarily young, but was still up there rocking out.

MC: At the risk of dropping a spoiler alert—there's a great monologue that Streep's character delivers onstage about a woman's choice to pursue her career and her dreams once she has kids and the judgments that come with that choice.

DC: That scene is a little humorous because I think Ricki's a little delusional about it—she's not Mick Jagger, and if she was, it's possible that her kids would have forgiven her! But I do think there's this double standard that exists and it really frustrates me. If a woman chooses to work, people say, "Oh it's so sad that you're not at home with your children." But no one ever says that to a man because it's assumed that the man is going to be the provider. That he's
going to miss aspects of his children's' lives because he's fulfilling that responsibility. But if you're a woman, it's not seen as fulfilling a responsibility; it's a selfish lark. And that's frustrating to me as the breadwinner in my own home. I do work and I might not necessarily be home everyday to bake cookies, but I do think that I'm providing something essential to my children. I mean, I'm feeding them. And my husband works too, but I see my job as equally valuable.

MC: But also, your adult life doesn't end when you have kids. You get to still have your aspirations and follow them. It's good for your kids to see that, I think.

DC: I think it's a good thing for my kids to see but I'm also conflicted whether my kids are going to appreciate that aspect of my life. I don't know necessarily that they will. I think that, deep down, we don't necessarily want our mother to be working. We just want them to take care of us. Because everybody that I know that has had an ambitious or artistic mother is somehow fucked in the head. So I'm like, What is that? How do I avoid
that?

MC: And you have a cameo in the film: dancing along to Ricki and the Flash at a local L.A. bar.

DC: Yeah, that was me! That was not my idea, by the way. The director Jonathan Demme insisted that I do it. I was like, Why are you doing this to me?! But it was a fun day.

MC: So what is it like to dance live in concert to Meryl Streep?

DC: It's pretty crazy! She was so focused on her performance. Hopefully she wasn't paying attention to the crazy hair-bopping in front of her. But it was definitely a surreal moment and I'm very glad that I had that.

MC:Was she someone that you envisioned in the role while writing it, or did that just come after?

DC: I usually try not to think about actors while writing, because the odds of those stars aligning and you getting those specific people are so rare. But as I was writing this, it was very, very hard not to go there in my mind. With every line that I wrote I just thought, Meryl Streep would be so amazing. I mean, she's amazing in every role, but physically I knew she could sing, I knew we hadn't seen her in a role like this for a long time. This isn't The Iron Lady, you know? It was a very exciting day when I found out that she could do it.

DC: He's so magical and so hot. Jonathan said, "I don't want an actor who can play the guitar, I want a musician who can act." And then Rick Springfield came in and killed it.

DC: You know, those mother-daughter relationships can be intense. I was just really impressed with them because I can't imagine acting in a movie with my mom, or my children. It was probably a really difficult exercise for them, but they made it look easy.

MC: What is it about that mother-daughter relationship that's such infinite idea fodder?

DC: There's a lot of projection going on both ways. A woman sees her daughter as sort of a conduit for her own unfulfilled expectations. And daughters see their moms as maybe the ghost of Christmas futures, so to speak. So it's a heavy relationship.

MC: So what other projects are you working on?

DC: I'm actually working on this series on Amazon that hasn't been announced yet, so it's kind of a secret. And I'm also writing the Barbie movie.

DC: People are surprised to hear this! I'm honestly so surprised and thrilled that they'd even want me on board because it's not my usual wheelhouse. But I loved Barbie growing up, and Barbie is a way that girls tell stories. It's not just a fashion doll. So I was like, We can write a movie to show the creative side of Barbie. That it's okay to love dressing her up and doing her hair. It does not need to be a guilty pleasure. It's something that's important to girls.

MC: I've never thought about Barbie that way before…

DC: Yeah, you could make little soap operas with her! So I was like, How do you make that aspect of the creativity and make it into a movie?
And that's what we're doing!

MC: There's a sort of running theme in your movies—Juno and Young Adult—where characters act age-inappropriately…

DC: That's completely accurate! There are certain women who don't really fit the template of: you're 20, now you dress like this…you're 30, now you dress like this…you're 40, now this is the role you're going to play in life. I've always had a challenge with that. I'm a 37-year-old mother of three, in the suburbs, and my hair is pink right now. Like I cannot accept adulthood fully. I acknowledge that about myself.

DC: It's not some sort of wishy-washy pink that a lot of celebrities are doing—it's like crazy burn-your-retinas pink.