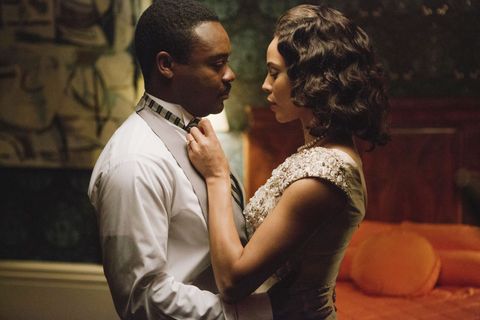 It's something moviegoers have long suspected, but a new study from the University of Southern California's Annenberg School for Communication and Journalism shows the lack of diversity in Hollywood is worse than you probably thought.

Older women, women of color, and those playing LGBT characters fared even worse. In 2014, no female actors over the age of 45 had a leading or co-leading part in the top 100 films. Just three of those female roles went to actors  from underrepresented racial or ethnic backgrounds. And no female leads or co-leads were lesbian or bisexual characters.

Women were poorly represented behind the camera as well. They accounted for just 2% of directors in 2014 and only 11% of writers in the top 100 films.


And surprise, surprise, women were more likely to be sexualized on screen, with 28% of of females shown in sexy attire in 2014 compared with just 8% of males. More than a quarter of women showed some nudity versus just 9% of men.

The report comes as some commentators have called summer 2015 the "Year of the Woman", as studios roll out female-led movies like Pitch Perfect 2, Spy, and Trainwreck. And it seems to paying off so far—Pitch Perfect 2 is currently among the 10 highest grossing movies of the year.

It remains to be seen, however, if this is simply empty rhetoric and 2015 will be just as imbalanced for women in the movies as previous years.

Professor Stacy L. Smith, an author of the study, told Deadline.com that there hasn't been much change in the industry since at least 2007. "The picture that film presents is one that bears little resemblance to our nation's demography," she said.

Indeed, the picture is even grimmer for people of color. Nearly 75% of all the speaking or named characters in the top 100 films of 2014 were white. And 17 movies that year didn't feature one black or African American speaking character—not one. More than 40 movies didn't depict a single speaking character who was Asian.

And only 19 of the 4,610 speaking characters in those films were lesbian, gay, or bisexual. There were no transgender characters.

Michael Sebastian Michael Sebastian was named editor-in-chief of Esquire in June 2019 where he oversees print and digital content, strategy and operations.
This content is created and maintained by a third party, and imported onto this page to help users provide their email addresses. You may be able to find more information about this and similar content at piano.io
Advertisement - Continue Reading Below
More From Culture
'The Bachelor' Is Back!
Who Is "Queen" Victoria on 'The Bachelor'?
Advertisement - Continue Reading Below
A Guide to the Fairies of 'Fate: The Winx Saga'
'You' Season 3 Is Adding a Menacing Character
'Fate: The Winx Saga' Season 2: Everything We Know
Who Is Michelle Young on 'The Bachelor'?
Who Is the Voice on the Radio in 'WandaVision'?
Everything We Know About Matt James
How to Join Marie Claire's Virtual Book Club
Watch UCLA Gymnast Nia Dennis' Epic Floor Routine