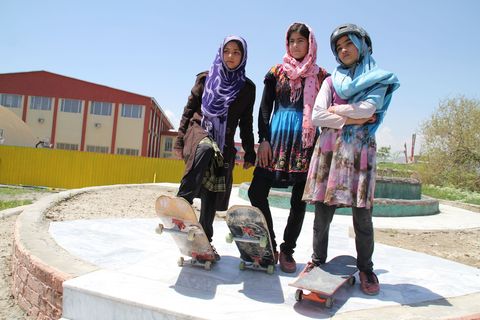 In 2007, when Australian skateboarder Oliver Percovich dropped his board in Kabul, he was greeted with the faces of young children, eager to learn how to skate. Alternating between the three boards he and his friends had brought with them, "Ollie" (yes, that's also a skateboard trick) became intrigued with the idea of starting a non-profit skate school in Afghanistan.

Two years later, Skateistan emerged as Afghanistan's first skateboarding school, which helps teach young male and female students. But in a country where women are still often dominated by men and married young, young women have really thrived—Skateistan lets them learn something new in a non-traditional setting. In honor of the United Nations' World Humanitarian Day (#ShareHumanity), we caught up with Percovich, humanitarian and founder of Skateistan, to get the scoop on how this organization—and skateboarding, of all things—empowers young women.

Marie Claire: Where did the idea come from?

Oliver Percovich: There is an urgent need to engage with young people in Afghanistan, as many are not engaged in a way that is interesting to them. Increasing access to education is of vital importance for youth, especially girls. When children in Kabul saw my skateboard, both girls and boys wanted to try it out. I thought that skateboarding could be a great hook for engaging them and providing them with high quality educational opportunities.

OP: Because skateboarding is the most fun activity in the whole world! It didn't really even exist in Afghanistan and there weren't any rules or social customs saying that girls aren't allowed to do it. It was a loophole, because girls were not allowed to ride bicycles, fly kites, or play soccer because they were seen as "boys activities." So skateboarding was ideal for getting girls involved because it was fun, it didn't have any cultural taboos, and it created a special community.

MC: What was the problem you were looking at?

OP: Lack of access to quality education for most children in Afghanistan. Afghan problems will only ever be effectively solved by Afghans, not foreigners. But you need a great education and leadership skills to solve complex problems.

MC: How has the organization grown?

OP: It has grown from a rag tag group of Afghan volunteers and myself to an international award-winning NGO with over 70 employees, projects in Afghanistan, Cambodia and South Africa, and headquarters in Berlin. We initially had around eight regular students in the beginning of 2008 to having 1,500 students today. Some of the first students, who were street working children are now managers in Kabul and Mazar-e-sharif.

MC: What's been your favorite story or participant so far?

OP: I am most excited about Hanifa's story. She is now 17 but joined Skateistan as when she was 12.

Hanifa is Afghanistan's most talented female skateboarder. Starting out as a student in Skateistan's creative arts and skateboarding program, Hanifa quickly became an excellent female role model and an inspiring teacher. Since first joining the Skateistan program in 2010, she has gone from selling tea in a local park to joining Skateistan's staff in Kabul as a paid skateboard instructor. She teaches girls' skateboard classes and takes part in weekly staff development training sessions.

Hanifa has told me "When I came to Skateistan my life changed so much because when I was working on the streets people would harass me. Now I feel good because I'm at Skateistan teaching the students. When students call me 'teacher' it makes me very happy. I think that by becoming a good skater I will make a better future for myself."

MC: What ages are your participants?

MC: How have you seen this impact female participants, in particular?

OP: Their self-confidence grows. They have opportunities that change their lives. We have had female students talk in front of Afghan parliament, present at Ted X Kabul (where there was 3 female participants in total and 2 came from Skateistan), and take part in the World Urban Forum run by UN Habitat where there was one female delegate from Afghanistan (from Skateistan!) out of 20,000 people there. These female students almost all come from poor backgrounds and had previously been working since the age of 10.

MC: How do they hear about the organization?

OP: A lot of it is through word of mouth. When there is something as amazing as Skateistan, it gets around the streets.

MC: How does the organization work?

OP: All programs are free and students need to register with us and consistently attend. You can start when you are 5 and you can stay with us for up to12 years. We have 3 main programs: "Skate and Create" which is one hour of skateboarding and one hour of creative arts based activities; "Back to School" which is an accelerated learning program where children that don't go to school do the first 3 years of schooling with us in one year and then we help them enroll into regular school; and "Youth Leadership" which takes the brightest students from Skate and Create and Back to School and gives them leadership opportunities.

We are significantly funded by individuals. I really encourage people reading this to become a monthly donor to Skateistan to allow us to continue to provide these essential opportunities to some of the most vulnerable children in the world.

MC: What's been the craziest/most surprising thing to come out of this?

OP: I'm very proud that Tony Hawk is on the Skateistan Advisory Board. Tony is a legend in skateboarding and an incredible role model. Skateistan students deserve the best and have some very remarkable people who have their backs.

MC: What are your hopes for the future of the organization?

OP: I would like to see our students grow from 1,500 today to over 100,000 in the future. I'm excited to see the impact Skateistan students will have on the countries where we operate and I'd love for the first female president of Afghanistan to be a former Skateistan student. Then the country would be in good hands.

OP: Everyone in the world is the same. Gender, race, ethnicity and religion do not make us fundamentally different. We need to seek out the commonalities between people, not the differences. Our shared humanity is the most important thing there is.