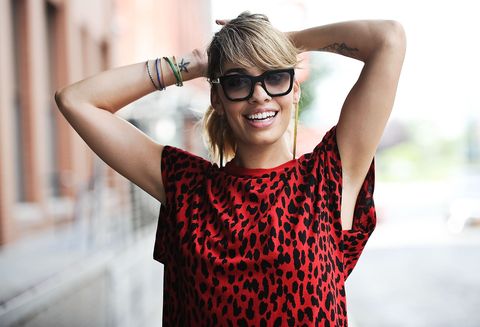 Stella Santana may have a famous last name—see: Carlos Santana—but that has nothing to do with why you'll want to hear her new album Selfish, out in January. In fact, it doesn't sound anything like her guitar-playing dad. Think modern R&B with more edge, lots of soul. We'll let her explain...

Marie Claire: Let's get this one out of the way first—as the daughter of a famous musician, do you feel you have to prove yourself?

Stella Santana: Not at all. Music is in my family, but my dad and I make drastically different music. The biggest pressure I feel is the pressure to stay true to myself, and not give in to all the voices around me. My parents are happy when they see something I create and recognize, "That's Stella right there."

SS: When I really liked a song as a kid, I would get obsessed and play it over and over. If they didn't have the song lyrics in the cassette or CD lining I'd be like, are you kidding?! Then I'd write the lyrics out myself so I could sing along. I definitely did that with entire The Miseducation of Lauryn Hill album and Aaliyah's "Are You That Somebody."

MC: Why the name Selfish?

SS: Because I've been called that a lot of times. I would ask myself am I an asshole? But then I realized people would call me that just because I wasn't doing what that person wanted me to do. I think, with women especially, it can be hard to say no to someone else and say yes to themselves.

"I think, with women especially, it can be hard to say no to someone else and say yes to themselves."

MC: Define "selfish" for us.

SS: When you're operating at your highest level of potential to give yourself, and the world, your best.

MC: Your putting this album out on your own instead on going with a label—why?

SS: The idea of a label served its purpose for a while, but to me the point of art is being able to express yourself freely. I've only been able to accomplish this album because I've pursued it on my own, and asked other people for help when I needed them for something specific. Going to a label would have meant having them do half the work and more compromising.

MC: Imagine you could collaborate with anyone, alive or dead—go!

SS: Frank Ocean. Amy Winehouse. Bob Marley. But not at the same time. I'd love to see what would happen if we combined our powers.

MC: What's the right tine of day to listen to Selfish?

SS: It's good for chill party music, or
for playing while you cook dinner or lay on the couch with a book. It perks up your ears without demanding all the attention in the room.

MC: Which song on the album do you feel the closest to?

SS: I call "Switch" the song of my heart. It's the very first song I ever made. I wrote the lyrics out like a poem and the music came later. I had just left my boyfriend and decided to do the music thing all the way. It was a painful decision. Sometimes, if I really think about that song, it can still make me cry. I realized that all the decisions that I'd made in life brought me to the point I was at. At first I felt sad, but then I recognized the power in this, that I got myself here and where I go next is also in my power.

"Selfish is actually very selfless, if you think about it. Because if you're true to yourself, you put it back out there for others."

MC: Any advice for other women trying to pursue their own paths or, you know, being selfish?

SS: We are the most scared to say the one thing we actually want the most. Listen to that. And don't just let it be, follow it. There are so many voices telling you what you want to do or what you should do, but deep down you know it, so be true to it. Selfish is actually very selfless, if you think about it. Because if you're true to yourself, you put it back out there for others.