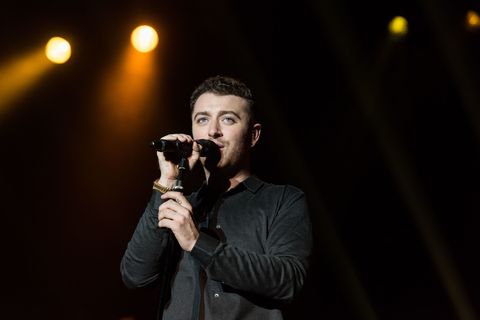 Updated, 10/5: Coinciding with Global James Bond Day (the anniversary of when Dr. No hit theaters), Sam Smith has unveiled the music video for "Writing's On The Wall." Shot in Rome, the downcast, yet powerful visuals feature the soulful crooner standing in front of a line of caskets draped in Union Jack flags, as well as footage of Mr. Bond himself Daniel Craig and Monica Bellucci in scenes from Spectre. Watch it in full below:

Original Post, 9/25: Perhaps just as important as who plays James Bond or his Bond Girl(s) is the voice behind the series' theme songs. With predecessors such as Shirley Bassey, Paul McCartney & Wings, Adele, and Carly Simon, it's a high honor and one that has officially been bestowed upon Sam Smith for the latest incarnation of the 007 series Spectre.

Smith's ballad, "Writing's On The Wall," premiered on The Radio 1 Breakfast Show with Nick Grimshaw earlier today, and features his signature soulful, core-shaking vocals, as well as his bold, romantically-charged lyrics: I want to feel love, run through my blood/ Tell me is this where I give it all up? / For you I have to risk it all / Cause the writing's on the wall.

While we can't say it's the runway hit that was Adele's "Skyfall," the all-or-nothing ballad is not number one on iTunes in the UK for nothing and will still make you feel all the feels, so give it a listen below:

Lauren Valenti Associate Web Editor I’m the associate web editor at Marie Claire.
Advertisement - Continue Reading Below
More From Culture
The Best TV Shows on Hulu Right Now
The Documentaries You Can't Afford to Miss in 2020
Advertisement - Continue Reading Below
'Killing Eve' Season 3 Review: What's Old Is New
A Super Pink Moon is Coming April 7
Pre-Order These Amazing Books Coming Out in 2020
The 8 Best Rom-Coms of 2020
Got 10 Minutes? Here's What to Watch on Quibi
We Could Be Getting More 'Tiger King'
HBO Is Making Iconic Shows & Movies Free to Watch
Tim Gunn & Heidi Klum Also Wear PJs to WFH