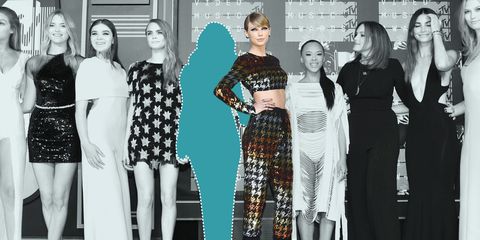 So far in my attempt to become friends with Taylor Swift, things are going swimmingly. You, People of the Internet, have shared some awesomely creative ideas for how I can get Taylor's attention—from Photoshopping pictures of Taylor and me hanging out to some fun Dubsmash sessions to a knitting attempt (#fail) to a songwriting venture (stay tuned…), I've gotten *really* into this new mission of mine. As you can see.

Even Tyra Banks heard my rallying #SallyForSwiftSquad cry and offered to help. Which was, as my seven-year-old daughter Willa would say, pretty epical.

But figuring out something Swift-y to do everyday while fielding constant (and mostly enthusiastic) questions from basically everyone I know asking, "So what's with you and this Taylor Swift thing?" has surprisingly led to a lot of introspection. You'd think I'd be busy trying to figure out how to email Tyra Banks (and I am, by the way—when a mega-star tweets you and offers to help, it's not exactly obvious how you're supposed to follow up. So...hey Tyra! What's up? DM me your email?). But I'm also thinking a lot about what all this means.

The other day, I confessed to a friend that when I really stop and think about it, I can't honestly imagine Taylor Swift being friends with me. Actually, the way I said it was, "I can't imagine Taylor Swift wanting to be friends with me." After which I spat out a mess of anxious self-critiques—about being too boring and too old and not really that knowledgeable about music and not hip enough or stylish enough and I go to bed too early anyway.

I spat out a mess of anxious self-critiques—about being too boring and not really that knowledgeable about music and not hip enough or stylish enough and I go to bed too early anyway.

Then moments later, I got an email from another friend warning me to be careful with this whole thing. "No one would look at your Instagram feed over the last few years and think you don't already roll with the coolest kids across the board," she wrote. I realized she's right—I have a pretty successful writing career, I'm on national television a few times a week as a fairly well-known political commentator, I travel almost constantly, and I have a great family I love and who loves me. Plus I have some great friends, a few of whom are famous. My life, my squad, is pretty good as is.

Why do I want more? And, specifically, why do I think the answer is Taylor Swift?  No disrespect to Taylor or anything, but there are plenty of cool people out there I could want to be friends with (ahemTyraBanksahem). Why Taylor in particular?  What's her unique allure?

It took me a while to figure it out, puzzling over all of this, trying to scratch beneath the "Well I think it would just be fun!" rationale that sounded fine when I said it in my own head but indeed seemed a bit thin when I said it out loud. It might be enough for a passing internet meme but certainly not to ground a friendship. Why the hell am I doing this?

I meditated on this for a while—assuming your idea of "meditating" involves long solo car trips with Taylor Swift albums blaring while you sing along at the top of your lungs and occasionally pause to think. This is what I realized: Taylor Swift is a sort of living talisman for the lighter-than-air kind of self-confidence I long for—and imagine we all do.

Taylor Swift is a sort of living talisman for the lighter-than-air kind of self-confidence I long for—and imagine we all do.

To pick just one of many examples, "Shake It Off" is such a resonant song in part because we all struggle with precisely that: letting go of other people's judgments and our own fears. And here's Taylor Swift, essentially the reigning queen of the world, clearly struggling with the same thing too. She's showing us a way through, *plus* she's not trying to act cool.  She seems comfortable just being herself, which is what cool really is.

I hate to break this to any readers under the age of 18, but high school never really ends. You still want to be one of the cool kids for the rest of your life. It's just that your understanding of what's cool (hopefully) changes. You still get nervous when you meet someone you think you'd like to become good friends with and you still get excited when they say they wanna hang out. The only difference is when you're older and you hang out and drink with your new friends, it's legal. But I still leave parties wondering if I embarrassed myself or whether so-and-so still likes me as much.  I'm sorry to tell you but those feelings never go away.

Add to that the mess of social media and the compulsion to present some over-edited version of our lives to show how great everything is when it might not be. In a new CNN special report called #Being13, my colleague Anderson Cooper discovered that many teens confess to taking 150 selfies in order to find a "perfect" one to post. In a recent survey conducted by the Girl Scouts, 74% of girls said everyone tries to look "cooler than they are" on social network sites. This past spring, ESPN documented how the carefully curated Instagram feed of a University of Pennsylvania college student and athlete hid the reality of her misery—or maybe even accentuated it. An hour after posting a beautiful scene of downtown Philadelphia, she committed suicide. We live in a culture of over-sharing, but a lot of us are afraid of being truly seen. That includes me.

"We're happy, free, confused, and lonely at the same time," Taylor Swift wrote in her song "22."  I can attest that it's still true at 38. Maybe Taylor is trying as hard as the rest of us to feel confident and fit in, but the enticing difference seems to be that she accepts it. I have this impression that Taylor Swift isn't embarrassed to be sometimes insecure or dorky or confused or lonely. She's okay with it and she's okay with showing it, which is what makes her happy and free. This is why I want to be friends with Taylor Swift.

And I'll be honest: I'm not sure I can see myself hanging out with super-hip supermodels wearing vintage negligees at two in the morning. But I can see myself trying—and hoping that some of Taylor Swift's sense of confidence and belonging rubs off. I guess sometimes #squadgoals say more about you than the squad.

Follow Sally's #SallyForSwiftSquad pursuits on Twitter—and help her get the word out!