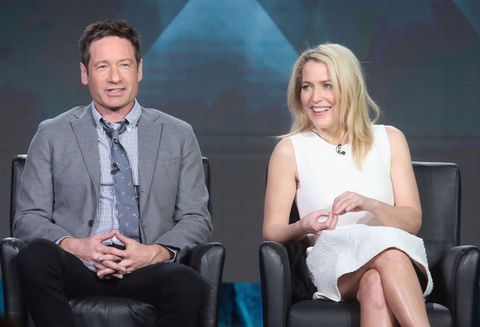 As anyone who's binge-watched The X Files knows, Scully and Mulder share equal screen-time. Basically, if it weren't for Scully, Mulder would just be talking to himself about aliens in some tragic diner. So yes, this is ridiculous.

Gillian told The Hollywood Reporter that Fox offered her "half of what they want to offer David" while negotiating the reboot, and later revealed that the network used to require her to stand a few feet behind him on camera. While she successfully fought against being marginalized during The X Files' original incarnation, she was understandably dismayed when the network offered unequal pay yet again.

"It was shocking to me, given all the work that I had done in the past to get us to be paid fairly. I worked really hard toward that and finally got somewhere with it," she told The Daily Beast. "Even in interviews in the last few years, people have said to me, 'I can't believe that happened, how did you feel about it, that is insane.' And my response always was, 'That was then, this is now.' And then it happened again! I don't even know what to say about it. It is…sad. It is sad."

Gillian and David ended up being paid equally for The X Files reboot, but that doesn't go far in mitigating the fact that she was low-balled in the first place. No words, only gifs.