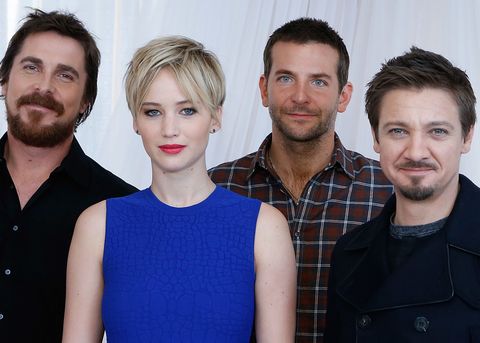 In a new essay for Lenny, Jennifer Lawrence finally opens up about the Sony leak that exposed the fact that she made significantly less money than her male American Hustle co-stars. But unlike us, who were like, "WTF, Sony?!", Lawrence had a completely different, completely surprising, completely J.Law response.

"When the Sony hack happened and I found out how much less I was being paid than the lucky people with dicks, I didn't get mad at Sony. I got mad at myself," she wrote. "I failed as a negotiator because I gave up early. I didn't want to keep fighting over millions of dollars that, frankly, due to two franchises, I don't need. (I told you it wasn't relatable, don't hate me)."

Why didn't she speak out sooner, when so many of her colleagues have been so vocal about the gender gap in Hollywood? She shies away from anything that seems like it's just "trending," she explains—but she also didn't want to be seen as "difficult."

"I'm over trying to find the 'adorable' way to state my opinion and still be likable! Fuck that," she wrote. "I don't think I've ever worked for a man in charge who spent time contemplating what angle he should use to have his voice heard. It's just heard."

Damn straight. Now let's focus on getting that Amy and Jen sister movie made, shall we?

Samantha Leal Senior Web Editor I'm Sam, the senior editor at MarieClaire.com.
This content is created and maintained by a third party, and imported onto this page to help users provide their email addresses. You may be able to find more information about this and similar content at piano.io
Advertisement - Continue Reading Below
More From Celebrity
A Slice of Diana's Actual Wedding Cake Is For Sale
Matt Damon Trolled Ben Affleck and Jennifer Lopez
Advertisement - Continue Reading Below
This Old Video of the Queen Saying "Nah" Is LOL
Diana Had a Secret Message on Her Wedding Shoes
Will's Friends Made "Jibes" About Kate's Mom
William Will Suffer "Worst" from Harry's Memoir
Simone's Boyfriend Sent Her the Sweetest Message
Harry's Friends Don't Want to Be in His Memoir
Will & Kate's Modern Approach to Raising George
Meet Simone Biles's Super Supportive Parents