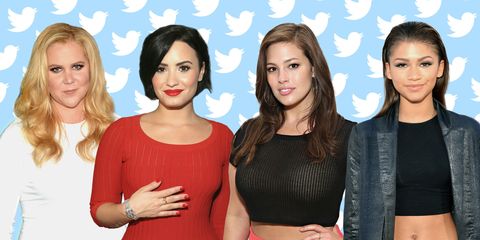 Twitter is a place where magic happens—Kanye rants, Chrissy Teigen shuts down haters, Lauren Graham confirms the Gilmore Girls revival. You can do a lot of powerful stuff in 140 characters, which is why, on International Women's Day, we're reflecting on all the feminist moments that have happened on Twitter. From Amy Schumer's body-positive photo shoot to Shonda Rhimes' demands for diversity, these ladies have stood up for themselves and all women in powerfully succinct tweets.

After Piers Morgan cleavage-shamed Susan Sarandon's SAG Awards look, she dedicated this photo to him:

Ashley Graham promoted the idea that beauty has no size:

In the wake of the Bill Cosby case, Lena Dunham called out Hollywood for siding with men in power:

It takes Hollywood far too long to believe survivors, and even longer to stop defending the men who make the money. A simple and sad truth.

After walking the red carpet at the SAGs, Mindy Kaling highlighted just how sexist reporters can be when asking women about their careers:

Reporters ask ders/Blake/Adam, rob/Charlie/Glenn, Louie If they get overwhelmed by acting & writing & if they ever doubt themselves, right?

Ariana Grande reminded the world that she is so much more than "Big Sean's ex-girlfriend":

Zendaya pointed out that women don't need to wear makeup to look beautiful:

@Manstagram_ that awkward moment when this tweet is irrelevant cause she's slaying both ways #wannaborrowmyglasses pic.twitter.com/4BXge1Ch4K

And Rowan Blanchard clarified that actually, women can wear as much or as little makeup as they want. It's their choice:

@BlakeMichael14 but it's not your decision whether or not girls wear makeup. Also not your place or anyone's place to call them "clowns"

Nicki Minaj proved she's just as good as any male rapper (like we even needed the reminder):

I've gone toe to toe w/everyone of your favorite male MC's. To undermine my skill & diversity as an MC is actually comical @ this point. 👸🏽😜

If a male rapper was on tracks w/Wayne, Jay, Eminem, Kanye, etc going ROUND 4 ROUND he'd b hailed as a GREAT as well. Jealousy is a disease

Not giving me my props doesn't stop me from being great. I am a mogul. Your hate is what made this possible. Lol. Thank uuuuuu! Mmuuaahhh!!!

To imply someone's ass is the reason they get on tracks and hold their own with every great MC who is still alive 😩 black ppl, do better lol

These woman need justice. #TransMurder is seldom talked about. These woman are loved and valuable. https://t.co/qj8susMK6y

My hope is that young women who have been hurt never have to hide/can let their voices be heard. #NOMORE

Know why I hate "why is diversity so important" question? It implies matter should be UP FOR DEBATE. As if LACK of diversity could be valid.

Ariel Winter embraced the scars from her breast reduction:

Guys there is a reason I didn't make an effort to cover up my scars! They are part of me and I'm not ashamed of them at all. :)

And Carrie Fisher shut down haters who said she hasn't aged well:

Rosa Heyman Deputy Editor As Cosmopolitan’s deputy editor, Rosa Heyman oversees a team of whip-smart editors and hilarious writers who bring you some of the best investigations on the internet, from dissecting the latest Kardashian drama to uncovering the link between white supremacy and misogyny.
Advertisement - Continue Reading Below
More From Culture
87 Movies Everybody Should Watch At Least Once
The Best Documentaries on Amazon Prime Right Now
Advertisement - Continue Reading Below
Heart-Pumping Action Movies Coming Out This Year
The Best TV Shows on Hulu Right Now
The Documentaries You Can't Afford to Miss in 2020
'Killing Eve' Season 3 Review: What's Old Is New
A Super Pink Moon is Coming April 7
Pre-Order These Amazing Books Coming Out in 2020
The 8 Best Rom-Coms of 2020
Got 10 Minutes? Here's What to Watch on Quibi