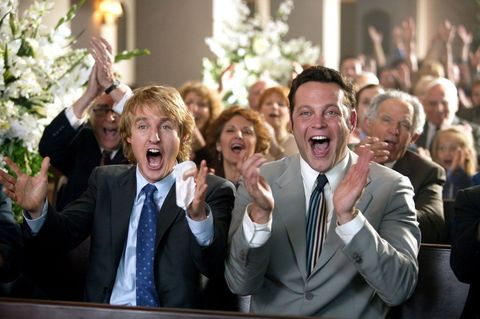 We've seen it play out in all its painfully awkward glory on the silver screen, in classics such as The Graduate, While You Were Sleeping, Wedding Crashers, and even Shrek. TV shows like Grey's Anatomy and Inside Amy Schumer have also taken a stab at the super uncomfortable narrative. Sure, the words "speak now or forever hold your peace" are totally archaic, but what really takes the cake (pun intended) is this collection of real-life wedding interruption whammies, generously provided by the internet.

"I was at the wedding with my then-girlfriend; her sister was getting married. At the moment in question, this guy I recognized from various parties and events stood up and said—this is as best an approximation as I can deliver, given that it was 17 years ago—'Lisa, I love you, and I'm sorry that I never told you. It breaks my heart to see you marry him, when I know that our lives would be better than anything you've imagined with him. Brent, I'm sorry for saying this, but it had to be done.' He left in tears, and more than one person was upset about it. The ceremony went on, but the tension was incredible," one Redditer says.

"My uncle objected at his daughter's (first) wedding. When they asked if anyone objected, he said, 'Yeah, I do. He never says anything.' The groom was an especially quiet person, and my uncle was an especially uninhibited sort. The minister took the bride, groom, and my uncle aside for a bit of counseling and then resumed the ceremony. The marriage did not last long, but she later remarried, to a guy who, so far as I can recall, never shut up," a wedding guest writes on this message board.

(In an ironic twist of events, the father and daughter shared a heartwarming slow dance to  John Mayer's "My Stupid Mouth" just hours later.)

We Were All Thinking It

"The best one I have ever witnessed came at my best friend's wedding. None of us really liked the woman he was marrying but at this point we had all just decided to let him do it because he wasn't listening to us anyway. We get to the day of the wedding and we are all standing there watching (I was the best man) and the preacher gets to the part 'Speak now or forever hold your peace'...and at that moment lightning struck outside and knocked the power out with a large BOOOM. We all stood there in stunned silence for a moment and asked him if that was proof enough for him. It wasn't and he married her anyway, was divorced within a few years," another Redditer confesses.

"Let Me Clear My Throat"

"My mother-in-law has never liked me so at that sensitive moment she chose to clear her throat very loudly. Not once. Not twice. Three times. We did our best to ignore it and went on with the ceremony," one bride tells this blog.

"We got married at the zoo, and during the ceremony two macaws alighted on a tree above a pool that was right beside us. As we said our vows, they decided to duke it out for top macaw in the flock, I guess. They started vocalizing and head-butting and generally loudly carrying on. The preacher just kept going (guess he'd heard worse), but when he got to the '...or forever hold your peace' part, one of the macaws rotated around the branch until it was hanging upside down, and then SLOWLY let go. We're talking one claw at a time. The upside-down macaw fell off and down into the pool 10 feet below with a huge splash. The remaining macaw proceeded to do what can only be described as a victory dance, hopping up and down on one leg and then the other whilst squawking at the top of its lungs," a Redditer shares.

When Nature Calls: The Sequel

We saved the best for last—this adorable ring bearer slays the wedding interruption game with the most graceful exit possible.

Mara Santilli Mara is a freelance writer specializing in culture, politics, wellness, and the intersection between them, whose print and digital work has appeared in Marie Claire, Women’s Health, Cosmopolitan, Airbnb Mag, Prevention, and more.
This content is created and maintained by a third party, and imported onto this page to help users provide their email addresses. You may be able to find more information about this and similar content at piano.io
Advertisement - Continue Reading Below
More From Culture
Fans Are Ready for Second Season of 'Bling Empire'
What We Know About Part 2 of 'Lupin'
Advertisement - Continue Reading Below
You *Need* to Follow the 'Bling Empire' Cast on IG
Watch the Trailer for the New 'Euphoria' Special
We've Getting a Season 2 of 'Bridgerton'
New Drama Movies That Promise to Move You
The Sexiest New Movies of the Year
A Look Back at Princess Anne's Life in Photos
Where Is the Cast of 'Gilmore Girls' Now?
'The Bachelor' Is Back!