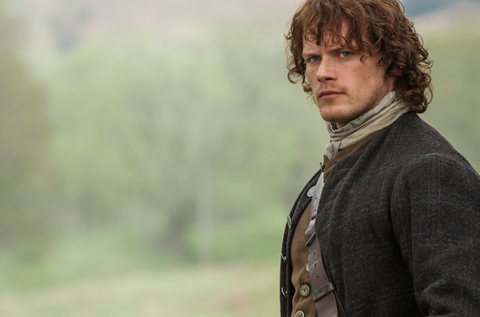 Ask your average Outlander fan what defines the show, and chances are they'll point to its steamy Scottish sex scenes. But the Starz drama is so much more than bodice ripping—something that becomes particularly clear during season two.

At its core, Outlander is a feminist tale of endurance, and repeatedly challenges traditional gender roles. And while there's certainly a lot to say about Caitriona Balfe's protrayal of Claire Fraser (Outlander's resident "strong independent woman" who slays just as hard as she twirls), the show's portrayal of her love interest, Jamie Fraser, is just as noteworthy.

Let's get this straight: Jamie, played by Sam Heughan, is in many ways a standard romance genre hero—he's Disney Prince-level chiseled, dreamy, and he loves himself a duel. But he also takes on qualities and tropes typically attributed to the ladies of romance literature. He's vulnerable, naïve, and sexually inexperienced. More than that, his scarred body is put on display to aid the Jacobite rebellion (sans consent), and—at the end of last season—he is repeatedly assaulted by the show's antagonist.

Considering that Outlander is known for its sex scenes, the show has a huge task ahead of itself: to handle the aftermath of Jamie's rape with the sensitivity and care it deserves (spoiler alert: they do a great job).

MarieClaire.com spoke to Sam Heughan about tackling such a weighty subject, and what it's like to play one of the most unlikely feminists on television.

Marie Claire: Claire isn't exactly a conventional wife, and she's challenged a lot of Jamie's expectations about womanhood. What will happen when she has a baby?

Sam Heughan: Jamie constantly expects Claire to play a certain role, because that's the way he's been brought up, and the way he sees society. But she's always challenging that, and he learns that maybe the way he's been taught isn't right. In season two, Claire takes on this role as "the housewife," and as we know, she's not very good at doing that sort of thing. She's a woman of action, and it does create tension between the two of them. He's very excited, obviously, about being a parent, but they kind of lose contact with each other.

MC: Something I love about Jaime is that he's a total feminist and doesn't realize it. The show manages to make him a romantic hero, yet he clearly doesn't fill the traditional dominant role in his relationship.

SH: He has reversed the traditional roles of men and women, in a sense, but I think the show portrays that actually they're equals. They're both intelligent, and hopefully it's a balanced relationship. He learns a lot from her, but she also learns from him about how to conduct herself in a society that she isn't used to. They complement each other.

MC: Jamie was raped last season. And even though he was able to climb out of the worst of his depression, you can't just turn these memories off. Will the experience stay with him?

SH: It's absolutely influenced him, not just physically, but also emotionally and mentally. I wanted for him to be affected by it, but at the same time not be thinking about it. If you don't think about or deal with an issue, it gets bigger. Hopefully, we will begin to see Jamie get released and be the man we recognize. But continuing on, it will always be a part of him, like the scarring on his back.

MC: How did you go about accurately portraying what a rape victim goes through? Did you do research?

SH: It was not so much about research, because this isn't just about the rape itself, it's also about a battle of wills. Randall [Jamie's rapist] physically and mentally abuses Jamie. He tried to poison Jamie's mind, so whenever Jamie thinks about Claire, he can't help but think about Randall. And that, for me, was the most interesting aspect. I think it was important to see Jamie go though this arc of losing himself and becoming reduced to almost nothing—to the bare essentials of a human being.

MC: Did you work closely with the writers to get these scenes right?

SH: I discussed it with the writers. We knew it was coming up—it was a big moment in the story. We discussed in great detail that what we were filming was not gratuitous in any way, and sensitive to the part. I guess what we discussed is that he's an individual, and that he deals with the situation in a way that's different than someone else would. But it does feel like very sensitive material and it was a great honor to be given that sort of challenge.

MC: We also can't forget that Claire is a victim of sexual assault. Will he lean on her?

SH: He doesn't discuss anything really, he just puts the experience away to a very dark place. She will confront him at some point, and he tries to explain himself, and the writing is beautiful. I was very touched.

MC: Outlander has gotten so much attention for its sex scenes, but sex is also used as a weapon in the show again and again. How will Claire and Jamie's sexual relationship change now that they've both experienced assault?

SH: Initially, when we got the first drafts, Caitriona and I felt that we didn't deal with enough, so we went back to the writers, and they took our thoughts on board and sort of rewrote it. I think we felt, or at least I felt, that Jamie wouldn't be jumping straight back into bed. Any sort of intimacy is a strange thing. In fact, there will be almost an absence of sex and it's going to surprise some people because they're expecting it to be this steamy show. When they do reconnect it comes back down to their unborn child and the fact that they're going to be parents.

MC: Since Outlander is based on books, true fans know what's going to happen. Will the series deviate from the novels—especially in regard to characters aging—so there's an element of surprise?

SH: They're probably going to recast, or I'm going to eat a lot of guacamole and become fat Jamie [edit note: don't worry, he's kidding]. I can't give away too many spoilers, but from season one to season two, the characters have already changed so much. In my mind, Jamie has gotten a lot older and a lot wiser.

Mehera Bonner Contributor Mehera Bonner is a news writer who focuses on celebrities and royals—follow her on Instagram.
This content is created and maintained by a third party, and imported onto this page to help users provide their email addresses. You may be able to find more information about this and similar content at piano.io
Advertisement - Continue Reading Below
More From Culture
Fans Are Ready for Second Season of 'Bling Empire'
What We Know About Part 2 of 'Lupin'
Advertisement - Continue Reading Below
You *Need* to Follow the 'Bling Empire' Cast on IG
Watch the Trailer for the New 'Euphoria' Special
We've Getting a Season 2 of 'Bridgerton'
New Drama Movies That Promise to Move You
The Sexiest New Movies of the Year
A Look Back at Princess Anne's Life in Photos
Where Is the Cast of 'Gilmore Girls' Now?
'The Bachelor' Is Back!